An influential speech is what represents your impact on the audience and puts your agenda at the foremost. Words do have a voice of their own and it matters when you are describing a shared purpose of raising women power. So, if you are also looking for one of such influential speeches, we have it here for you.

We are here, presenting you a speech on International Women’s Day for anyone addressing the women or representing the women. The speech will help you represent women’s power in different aspects and represent our shared purpose.

Good Morning to all the honorable guests, ladies and Gentleman

“It’s a great pleasure to celebrate this International Women’s Day with you all and share my thoughts on this day”.

As said by Harriet Beecher Stowe, a famous American author, women really do build a society. They build not only themselves but a whole community. Yet history has failed the women many a time to represent what a woman can be. There cannot be just a day to celebrate a woman. Every day should be a day, where we respect the divinity of women.

International women’s day is celebrated every year with huge enthusiasm around the world to celebrate the achievements of women in social, political, economic, and other fields of life. Today, women rule almost in every field of life and work at par with men. We cannot deny, that be it at home or at work, they do it all with so much zeal and ace in each one of it in their own way.

International women’s day was observed for the first time in 1911. Since then, every year on the 8th of March, womanhood is celebrated all around the world, to honor all the astounding women in our lives and all the extraordinary women history has witnessed. This day is particularly observed to acknowledge the achievements of women in various aspects of life.

Essay on Save Water Save Life

International women’s day was created to put forward and express an idea to the world, that each gender deserves to be treated as equal. The day was aimed to present the aspects of the life of women in a man’s world. To create changes in the mindset of the world. To create a positive impact on the world. But why do we need a Women’s Day?

There’s a need to celebrate a women’s day because women are often subjected to preconceived perceptions of what they can do and what they cannot. They face biased behavior of people and statistics show that education availability for women is still lower than men.

Every four out of five women faces harassment at one point in her life. They are so many times likely to be a victim of Domestic Violence and sexual abuse in childhood. More than thirty thousand girls are forced into child marriage every single day and others get subjected to illegal trafficking and female genocides.

Pay according to gender, continues and men are still allowed to make major decisions about women like abortion. In addition to this, other persisting factors still go unrecognized. So, we clearly need a day to start conversations and open agendas that need global attention.

“We share a common future and we are here to find a common ground so that we may help bring new dignity and respect to women and girls all over the world.”

The journey of Women from protesting on the streets to making the world celebrate International women’s day was not an easy one. We celebrate this day today, only because of the historical footsteps of great women who fought for their rights. So, when did this all women movement, standing up for themselves started? Let me take you back in time to be more grateful for the world you have today.

Women activism or can say, the fight of Women to attain equal rights dates back to the late 1800s when the women of that time was fighting to get the rights to vote for the leader of their choice. Also, there was a demand for the right of women to work and be a part of various training programmes but till that time, the voice of women was treated inconsiderately. Women were not let to put their point and have a say about anything from politics to economics. They were not even allowed to speak at conferences.

So, the first campaign in the journey of providing equal rights to women started on 28th February 1908. An all-women strike by the garment workers, against the working conditions, these women were subjected to. It started with a basic labour movement but the voices of those women left a mark at the beginning of a journey of self-respect.

Several other movements led by the suffragists and suffragettes of the Socialist Party of America in 1911 were witnessed in the western countries. Their movements did make an impact and in 1919, women were given voting rights because of the support congress got from these women during World War I.

It was only during the era of 1970s, that the long fight for women rights became impactful enough to create an intensified movement. The demand for equal rights became strong, feminist action became powerful and rallying became common way to express disapproval against the patriarchal laws of Society. A decade after, women started switching roles and fixed themselves into a men’s job, thriving to get considered equivalent to a man and show that the world does not require a gender label to do certain jobs. Well, needless to say, they succeed!

Globally, we celebrate International Women’s day on the 8th of March to honor the achievements of women in various fields. This celebration gives acknowledgment to those women’s personalities who excelled in their own fields. Certainly, women have contributed significantly to the welfare of the society and country subsequently. Read International Women’s Day Speech here.

Furthermore, women’s day clutches a great significance and it becoming a custom year after year. Moreover, this celebration is a sign of appreciation, respect, love, and care towards women in our lives and in society.

In addition, I am glad that schools and colleges now celebrate women’s day. This will instill respect and care for women in the mind of the young generation, right from their childhood days.

It is a great responsibility to empower women also it is necessary for gender equality. Moreover, society is better when women are given equal respect and are not taken for granted. In the past, women were restricted in homes and were not permissible to step out of the house for work.

Their household responsibilities are their only area of work. But with time society has seen many changes. Furthermore, this generation trust and values women with great responsibility.

Now, women are given equal opportunity at work and are allowed to stand among and at times ahead of men in many fields. Women today have begun realizing their strengths and abilities are ready to step out of their homes, contributing to the success of their home and the entire society.

Women are indeed making the world turn heads towards them. Also, it was not possible before but now it is possible and they are doing it today. And you can see that women are reaching great heights and even traveling to space.

In addition, they are entering into every field and are making success in all of them proving what they are capable of. The participation of women is the most effective way to lift communities, companies, and countries. 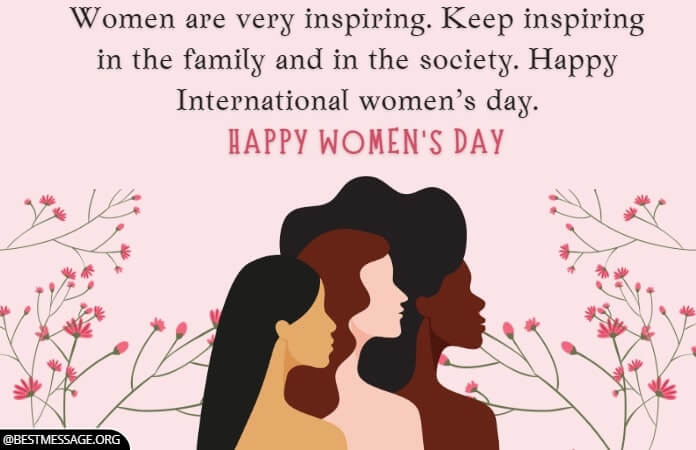 The modern women are no longer dependent on men. She is independent and self-confident in every aspect and is capable of doing everything equal to men. Also, we should respect each of them not because of gender, but for their own identity.

Furthermore, we have to accept that both women and men contribute equally to the betterment of the home and society. Women are the one who brings life. And every woman is extraordinary, no matter where she works whether it’s a home or office.

They are making a difference to the world around her, and most importantly, they play a vital role in the upbringing of children and making a home. Our responsibility is to honor and appreciate the women who are making success in their lives and bringing success into the life of other women and those around her.

Besides, movements and a significant rise in International Women’s Day activities in every corner of the world and many more female-focused days and initiatives around the globe are constantly working to liberalize the women.

We are moving towards an exhilarating time in history where the world accepts gender balance. Now the world notices their absence and celebrates their presence.

To conclude, it feels nice to have a day to celebrate the achievements of women. Thus, on this international women’s day, let’s recognize the significance of women in our lives and on society and inspire them for greater future achievements. As they can contribute equally to the home, society, and nation.