The fundamental dogma, on which everything in Christianity is based, is that of the Blessed Trinity in whose name all Christians are baptized. The feast of the Blessed Trinity needs to be understood and celebrated as a prolongation of the mysteries of Christ and as the solemn expression of our faith in this triune life of the Divine Persons, to which we have been given access by Baptism and by the Redemption won for us by Christ. Only in heaven shall we properly understand what it means, in union with Christ, to share as sons in the very life of God.

The feast of the Blessed Trinity was introduced in the ninth century and was only inserted in the general calendar of the Church in the fourteenth century by Pope John XXII. But the cultus of the Trinity is, of course, to be found throughout the liturgy. Constantly the Church causes us to praise and adore the thrice-holy God who has so shown His mercy towards us and has given us to share in His life.

Click here for commentary on the readings in the Extraordinary Form of the Roman Rite.

Why is this feast celebrated at this particular time? It may be interpreted as a finale to all the preceding feasts. All three Persons contributed to and shared in the work of redemption. The Father sent His Son to earth, for “God so loved the world as to give His only-begotten Son.” The Father called us to the faith. The Son, our Savior Jesus Christ, became man and died for us. He redeemed us and made us children of God. He ever remains the liturgist par excellence to whom we are united in all sacred functions. After Christ’s ascension the Holy Spirit, however, became our Teacher, our Leader, our Guide, our Consoler. On solemn occasions a thanksgiving Te Deum rises spontaneously from Christian hearts. 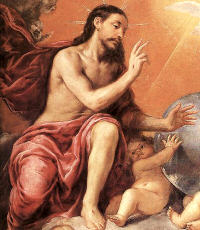 The feast of the Most Holy Trinity may well be regarded as the Church’s Te Deum of gratitude over all the blessings of the Christmas and Easter seasons; for this mystery is a synthesis of Christmas, Epiphany, Easter, Ascension and Pentecost. This feast, which falls on the first Sunday after Pentecost, should make us mindful that actually every Sunday is devoted to the honor of the Most Holy Trinity, that every Sunday is sanctified and consecrated to the triune God. Sunday after Sunday we should recall in a spirit of gratitude the gifts which the Blessed Trinity is bestowing upon us. The Father created and predestined us; on the first day of the week He began the work of creation. The Son redeemed us; Sunday is the “Day of the Lord,” the day of His resurrection. The Holy Spirit sanctified us, made us His temple; on Sunday the Holy Spirit descended upon the infant Church. Sunday, therefore, is the day of the Most Holy Trinity.

—Excerpted from The Church’s Year of Grace, Pius Parsch

The Solemnity of the Most Holy Trinity

Trinity Sunday is the first Sunday after Pentecost in the Western Christian liturgical calendar, however, in Eastern Christianity there is no specific day set aside to celebrate the Christian doctrine of the Trinity. The Eastern Churches point out that they celebrate the Trinity every Sunday. Westerners do as well, we just set aside a special feast day for the purpose. In the West, Trinity Sunday, officially called “The Solemnity of the Most Holy Trinity,” is one of the few celebrations of the Christian Year that commemorates a reality and doctrine rather than an event or person. 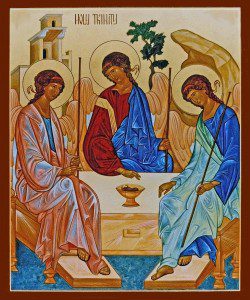 Holy Trinity Sunday is celebrated on the first Sunday following Pentecost in most of the liturgical churches in Western Christianity. It is a solemn celebration of the belief in the revelation of one God, yet three divine persons. It was not uniquely celebrated in the early church, but as with many things the advent of new, sometimes heretical, thinking often gives the Church a moment in which to explain and celebrate its own traditions; things it already believes and holds dear. In the early 4th century when the Arian heresy was spreading, the early church, recognizing the inherent Christological and Trinitarian implications, prepared an Office of Prayer with canticles, responses, a preface, and hymns, to be recited on Sundays to proclaim the Holy Trinity. Pope John XXII (14th century) instituted the celebration as a feast for the entire Church; the celebration became a solemnity after the liturgical reforms of Vatican II.