Looking to get some best Cowboy Bebop Quotes? We have compiled the best quotes and images for you which will inspire you for sure.

Cowboy Bebop is an anime set in the year 2071, which is ironic because this old school classic was ahead of its time.

The unique space adventures and unique themes will make you think on a deep level, and open to your mind to new perspectives like no other anime of its time.

Here are some of the BEST quotes Cowboy Bebop has to offer. 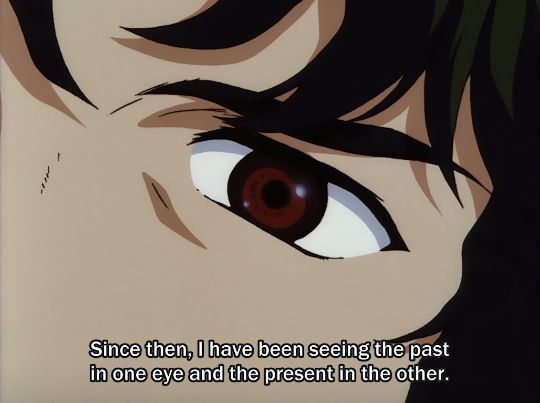 “You told me once to forget the past, cause it doesn’t matter, but you’re the one still tied to the past, Spike.” – Faye Valentine

“I can’t be stuck in one place for long—it’ll kill me. My whole family’s like that.” – Faye Valentine

“You know the first rule in combat? shoot them before they shoot you.” – Faye Valentine 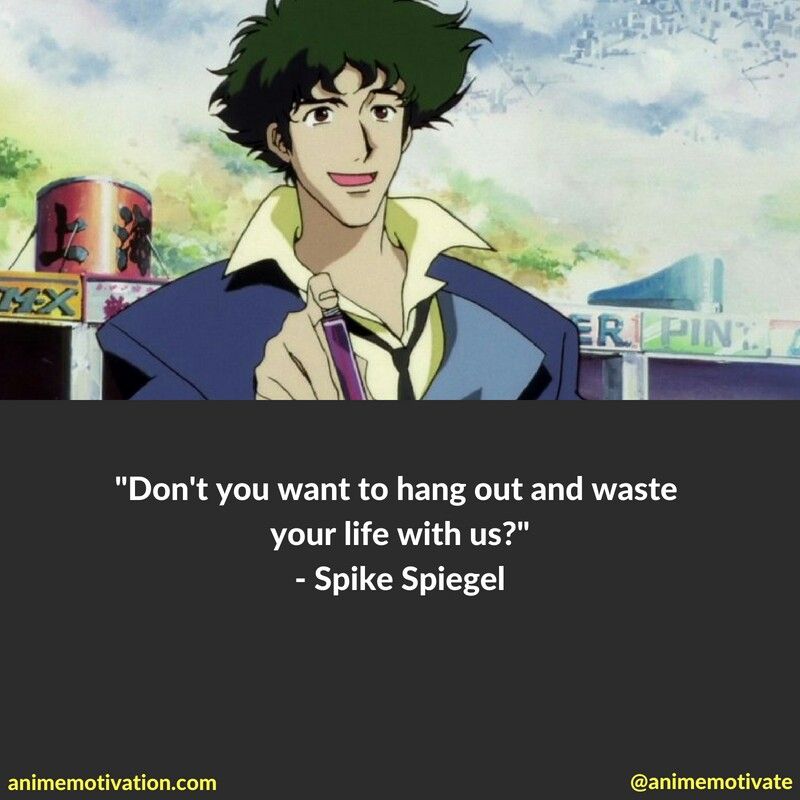 “The past is the past and the future is the future. A man is a man and a woman is a woman. The present is the present. I am who I am and you are who you are. That’s all there is to it. Does it really matter? Or do we just think it does?” – Faye Valentine

“Survival of the fittest is the law of nature. We deceive or we are deceived. Thus, we flourish or perish. Nothing good ever happened to me when I trusted others. That is the lesson.” – Faye Valentine

“They often say that humans can’t live alone. But you can live pretty long by yourself. Instead of feeling alone in a group, it’s better to be alone in your solitude.” – Faye Valentine

“The souls that God has given us, our spirits. Our spirits, which found a way to swim through the immense network and live in the infinity of space. Is not the human body a mere shell? A form of existence all too small and weak for consciousness with such vast reach and potential.” – Londes 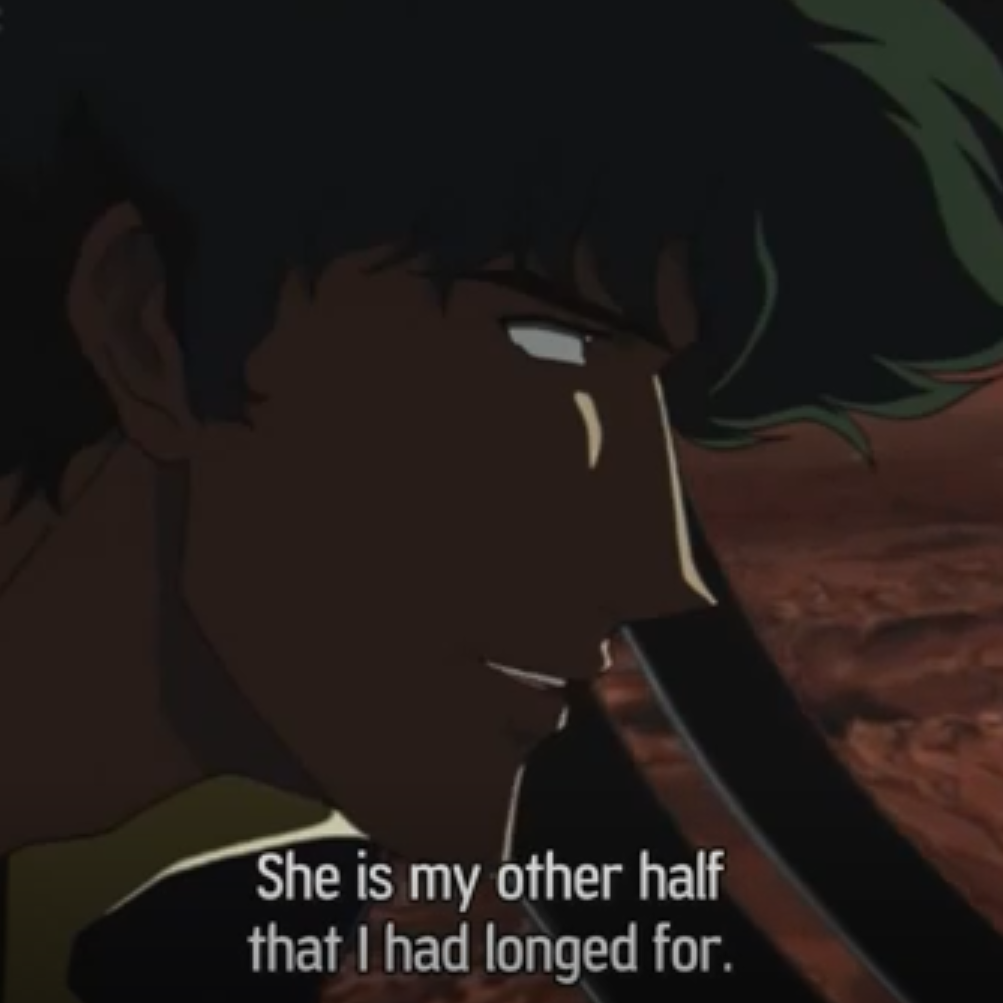 “I have no fear of death. It just means dreaming in silence. A dream that lasts for eternity.” – Vincent Volaju 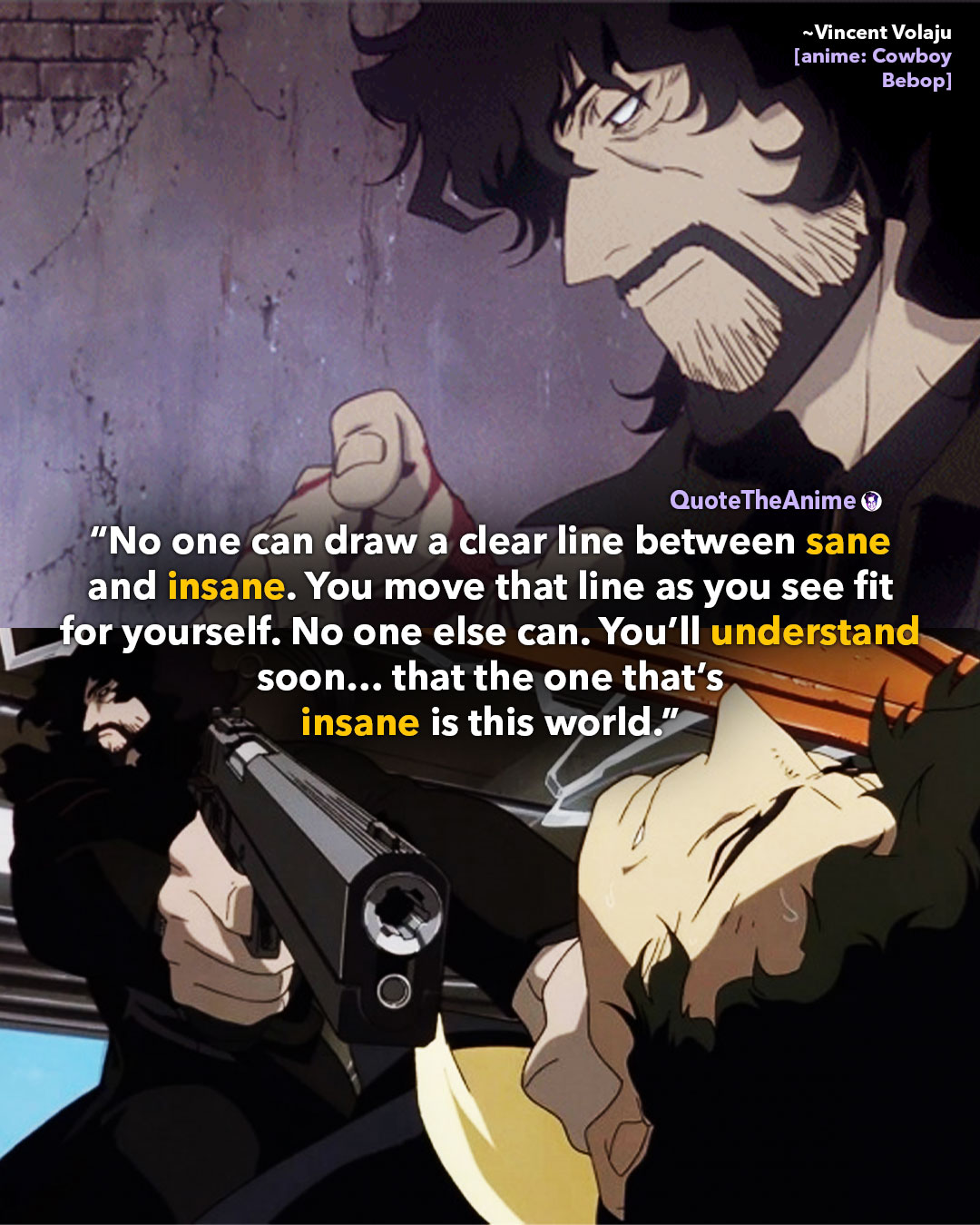 “Of the days that I have lived, only those I spent with you seemed real.” – Vincent Volaju 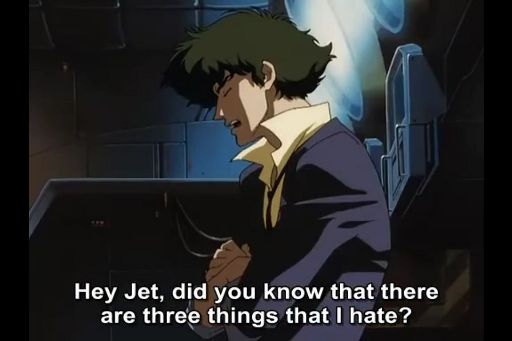 “No one can draw a clear line between sane and insane. You move that line as you see fit for yourself. No one else can. You’ll understand soon… that the one that’s insane is this world.” – Vincent Volaju

“Know much about purgatory? It’s the place between heaven and hell, where those who were left behind, unable to get into heaven continue to suffer, a place of struggle and pain. In other words, the world that we’re in now.” – Vincent Volaju 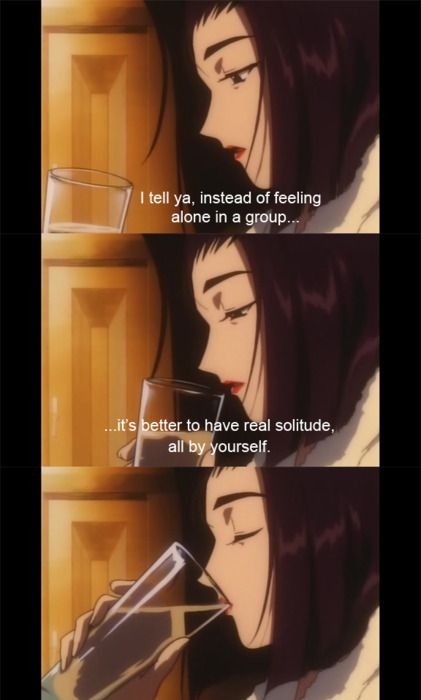 “It’s just like Charlie said in my dream. If you want to receive you have to give. See Spike, you got to listen to your dreams, that’s how you find your dream girl.” – Jet Black 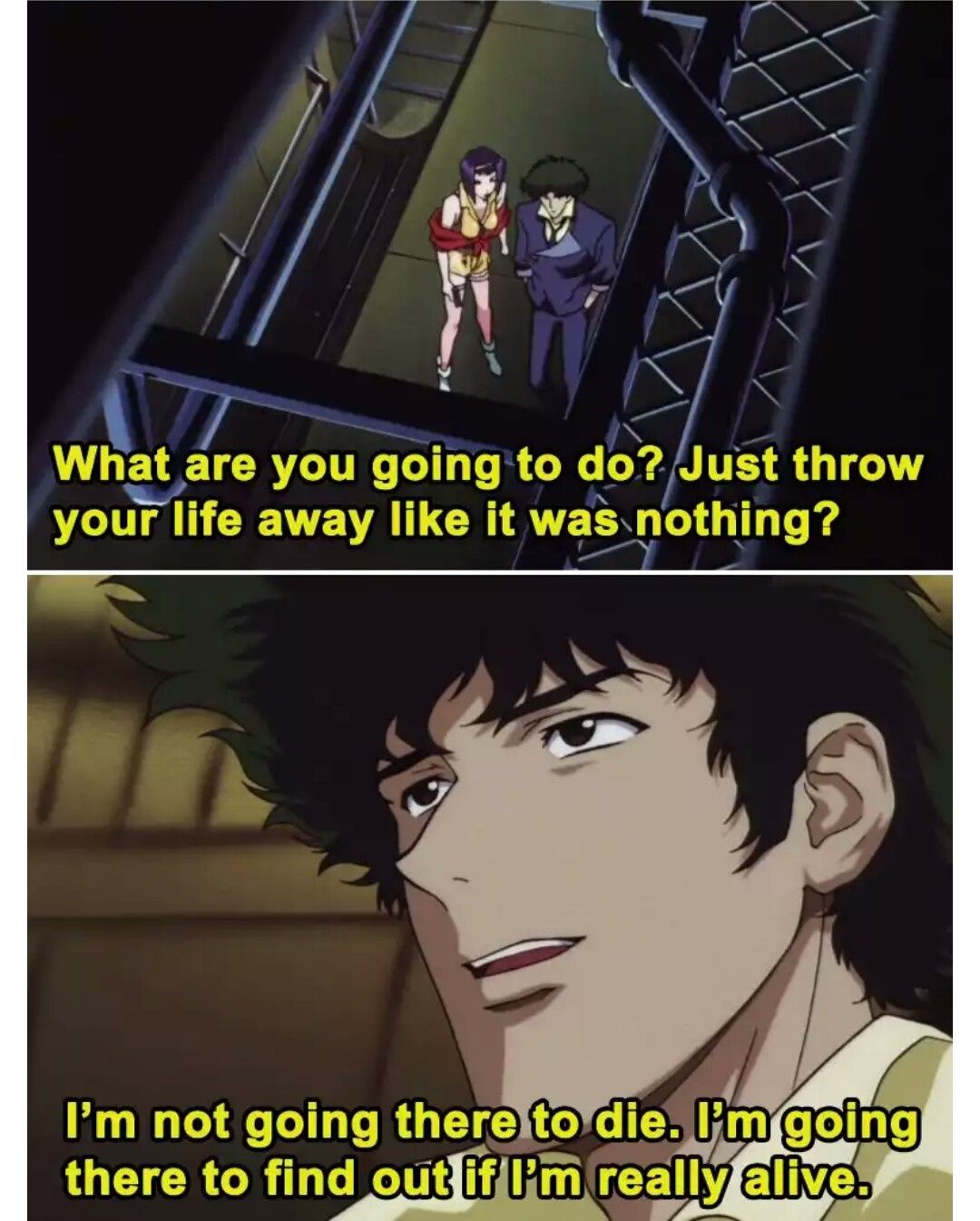 “Humans were meant to work and sweat for their money after all. Those that try to get rich quickly or live at expense of others – all get divine retribution along the way. That is the lesson. But, one thing about humans is that they quickly forget the lesson they have learnt.” – Jet Black

“Men always seem to think about their past before they die, as though they were frantically searching for proof that they truly lived.” – Jet Black 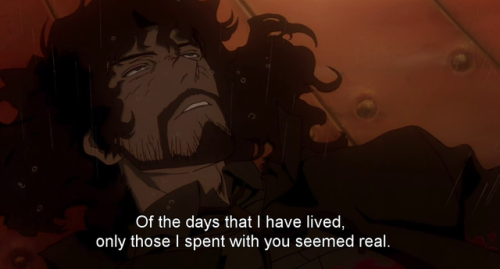 “You were always there for me, and that’s all I needed. Just you. For some reason, I didn’t feel sad or broken up, it just didn’t seem real. But slowly I realized it was real – that you were gone. And little by little, I slowly felt something inside me go numb.” – Jet Black

“Everything has a beginning and an end. Life is just a cycle of starts and stops. There are ends we don’t desire, but they’re inevitable. We have to face them. It’s what being human is all about.” – Jet Black

“When you and I first met, you told me something. You said that you had died once, that you had seen death. Why can’t you just let it go? Forget the past.” – Jet Black

“Look at my eyes, Faye. One of them is a fake because I lost it in an accident. Since then, I’ve been seeing the past in one eye and the present in the other. So, I thought I could only see patches of reality, never the whole picture. I felt like I was watching a dream I could never wake up from. Before I knew it, the dream was over.” – Spike Spiegel

“I was younger then, I wasn’t afraid of anything, I didn’t think about dying for a second. I thought I was invincible. Then I met some girl. I wanted to live, I started to think like that; for the first time I was afraid of death. I had never felt like that before.” – Spike Spiegel

“A fallen angel banished from heaven, arises into the light to be received by the benevolence of God.” – Cowboy Bebop

“I love the type of woman who can kick my ass.” – Spike Spiegel

“Once, there was a tiger striped cat. This cat, died a million deaths, revived and lived a million lives. And he had various owners that he didn’t really care about, the cat wasn’t afraid to die. Then ONE day, he met a white female cat, the two of them fell in love and lived together happily. Well, the years went by and the white female cat got old and passed away. The Tiger Striped cat cried a million times, then he also died. But this time…..he didn’t come back.” – Spike Spiegel

“There are three things I hate the most: Kids, pets, and women with attitude. So tell me, why do we have all of them packed into our ship?” – Spike Spiegel

“Don’t you want to hang out and waste your life with us?” – Spike Spiegel

“Do not fear Death. Death is always at our side. When we show fear, it jumps at us faster than light. But, if we do not show fear, it casts its eye upon us gently and then guides us into infinity.” – Laughing Bull

“Angels banished from heaven have no choice but to become devils.” – Vicious

“There is nothing left to believe in.” – Vicious

“Why don’t we drink to me and my reflection in your lovely eyes?” – Andy Von De Oniyate

“You said that you didn’t need comrades, but I’m attached to that word… to the point of tears.” – Gren

At this club open to all comers to play, Night after night

at a club named “MINSTONS PLAY HOUSE” in Harlem,

they play jazz session competing with others. Young jazz men with new sense are gathering.

At last, they created a new genre itself.

They are sick and tired of conventional fixed style jazz.

They eager to play jazz more freely as they wish. then…in 2071 in the universe.

The bounty hunters, who are gathering in spaceship “BEBOP”,

will play freely without fear of risky things.

They must create new dreams and films by breaking traditional styles.

The work, which becomes a new genre itself, will be called

[Spike is eating a plate of stir-fried bell peppers that Jet made.]

[Antonio, Carlos and Jobim (aka The Three Old Men) are playing cards.]

Jet: Come on, didn’t your grandmother tell you to never quit a job before it’s finished?

Spike: My grandmother died before I was born.

[Faye talking to a shopkeeper right before a shootout]

[After Faye is captured and handcuffed by the criminal casino owner, Gordon]

[Spike and Jet talking in a casino elevator]

[After Faye is captured and handcuffed by Spike and Jet]

[Jet and Spike talking about the bounty on Faye]

[Jet and Spike ordering at a restaurant]

[Vicious and Spike face-down at the Cathedral.]

Sympathy for the Devil

[Faye eats the only thing left in the refrigerator, a can of dog food, while Ein waits by his food dish.]

[Jet and Spike are watching a bounty target at a nightclub.]

(Spike, Jet, and Faye on the Bebop with the crystal ring)

[V.T. comes across Spike crouching on the ground outside of the café holding his thumb out]

[Stella points a gun at Spike who has trespassed onto her shuttle.]

[Rocco has been shot and is lying on the ground dying]

[to Spike, after Rocco has been shot and is lying on the ground dying]

[Faye gets mad and jams her heel into Jet’s foot. This is interesting foreshadowing on Faye’s character]

[Spike and Faye are getting their bounty from the ATM, Edward twirls Ein into the air.]

[Jet and Elisa are sitting inside La Fin.]

[Jet and Spike are chasing after Rhint and Elisa in their aircrafts.]

[Elisa is holding Jet at gunpoint, but Jet continues to walk towards her.]

“[Jet and Elisa after the cops have detained Rhint.]”

Toys in the Attic

[Laughing Bull chants as he and his Son sit around a campfire at night. They are on a moon of Jupiter.]

[The Van has granted Vicious permission to buy/sell Red Eye on Callisto with Gren.]

[Faye takes a drink at the Blue Crow and sneezes.]

[Faye looks at him weird.]

[Laughing Bull chants as he and his Son sit around a campfire at night. They are on a moon of Jupiter.]

[The episode of Big Shot talking about Bebop’s bounty catches]

[Faye joking about their bounties]

[Ed explaining how the game works]

[Learning what the Gate Corp has been hiding from the public]

[Ed and Hex are both impressed at each other’s skill]

[Ed focused on her game of chess]

[A couple of bohemians talking at Faye]

[Spike and Faye realizing that Hex is not still the mastermind]

[Ed still sitting at her e-chessboard]

(Spike and Jet are trying to play beta in a VHS)

“Tell me, why do you think people believe in God? Because they want to. It’s not easy living in such an ugly and corrupt world. There is no certainty and nothing to hope for. People are lost, so they reach out, don’t you get it? God didn’t create humans, no it’s humans that created God.”

Do you know what the greatest and worst invention that humans ever made was? Television. Television controls people using information and steals their sense of reality. Yes. Now television itself is a religion. Dr Londes (Cowboy Bebop)

[Spike and Jet begin laughing together]

[As Spike walks away, Faye points her gun up in the air and fires five shots, then looks as if she is about to start crying.]

Happy Mothers Day Wishes For Other In Law

The Cask of Amontillado | Quotes