Dr. Martin Luther King, Jr. was a Baptist minister who became a civil rights leader, promoting nonviolent activities to achieve equal rights for African Americans. His legacy relates to his ability to motivate local and federal government lawmakers to end racial discrimination and to create economic justice for poor Americans in all aspects of their lives including housing, employment and education. Discover several important facts about Martin Luther King, Jr. 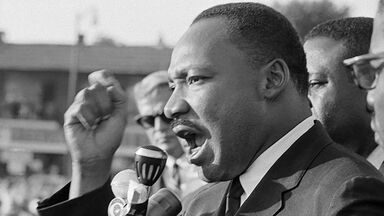 Martin Luther King, Jr. was born on January 15, 1929, in Atlanta, Georgia, to Michael Luther King, Sr. and Alberta King. Martin’s given name, at birth, was Michael, like his father’s. His father changed both of their given names to Martin after a visit to Germany in honor of the Protestant leader, Martin Luther.

Became a Pastor at 19

King’s father and grandfather were ministers, all pastoring at Ebenezer Baptist Church in Atlanta. Young Martin followed in his family’s footsteps and chose the ministry as his vocation. He became an ordained Baptist reverend when he was 19 years old. He served with his father as co-pastor at Ebenezer prior to continuing his education.

In 1951, Martin Luther King earned a Bachelor of Divinity degree from Crozer Theological Seminary in Chester, Pennsylvania. He then moved on to Boston University to study for his doctorate. He garnered a Doctorate of Philosophy in Systematic Theology from Boston University in 1955.

While attending Boston University, he met Coretta Scott, a singer and civil rights activist, who was a student at the New England Conservatory of Music in Boston. They were married on June 18, 1953, at her parents’ home in Heiberger, Alabama.

In 1954, Martin Luther King accepted the call to pastor the Dexter Avenue Baptist Church in his new bride’s home state of Alabama. The church was located in the city of Montgomery, a highly-segregated city where almost half the citizens were African American. He became very involved in the community as a civil rights activist, including serving on the executive committee of the National Association for the Advancement of Colored Persons (NAACP).

In 1955, King founded the Montgomery Improvement Association (MIA) in conjunction with other executive members and officers of the NAACP’s Montgomery chapter. The MIA, a group of local Black ministers and community leaders which was formed to improve race relations in Montgomery.

In 1955, as President of the MIA, King led the nonviolent Montgomery Bus Boycott, which ultimately led to the desegregation of city buses. The bus boycott resulted from the Rosa Parks bus incident. Rosa, the secretary of the local chapter of the NAACP, famously refused to give up her seat to a white woman. King’s involvement in the 381-day boycott led the Supreme Court of the United States to rule that bus segregation was unconstitutional.

Became a Father of Four

Coretta Scott King gave birth to Yolanda Denise King on November 17, 1955. The first of four children, Yolanda was joined by her brother Martin Luther King III on October 23, 1957. They were both born in Montgomery; the two younger children were born in Atlanta. Dexter Scott King joined the family on January 30, 1961, followed by Bernice Albertine King on March 28, 1963.

In 1957, Martin Luther King, Jr. worked with Ralph Abernathy and many other civil rights leaders, activists and pastors to found the Southern Christian Leadership Conference (SCLC) in Atlanta. This organization was formed to battle segregation and achieve civil rights of African Americans across the United States using civil disobedience such as sit-ins and demonstrations. King was elected president of the SCLC.

Moved Back to Atlanta

In 1960, King left his pastoral position in Alabama to returned to his hometown of Atlanta. While continuing to serve as co-paster of Ebenezer Baptist Church, he began a full-time pursuit of civil rights through nonviolent means, such as sit-ins and marches. The goals of the civil rights movement focused on abolishing racial discrimination in many areas including public transportation, employment, voting, and education.

In April of 1963, King organized and participated in non-violent protests in Birmingham seeking to end desegregation in Alabama’s largest city. This protest garnered brutal police responses with dogs and high-pressure water hoses that were widely covered on national network news. Television cameras showed King and other peaceful marchers being attacked by police dogs and fire hoses, then being arrested. King refused bail, then wrote his Letter from a Birmingham Jail.

Organized March on Washington for Jobs and Freedom

King worked with other civil rights leaders to organize the March on Washington for Jobs and Freedom, which took place on August 28, 1963. The purpose of the march was to protest racial discrimination in employment and racial separatism in schools, while also demanding fair wages for all workers. The march was the largest gathering in Washington, DC’s history. It was at this march that King delivered his famous I Have a Dream speech at the Lincon Memorial.

In the spring of 1965, King helped to organize the Selma to Montgomery marches for voting rights. During the March 7 event, King and many other nonviolent marchers were brutalized by law enforcement officers on the Edmund Pettus Bridge in Selma, Alabama. Many protestors were seriously injured during the March; one person was killed by members of the Ku Klux Klan (KKK). Dozens of others, including King, were arrested. The day came to be known as Bloody Sunday. A few days later, on March 21, protestors gathered once again and were able to complete their multi-day trek to the state capitol in Montgomery.

King was very active as a civil rights leader from his 1955 arrival in Montgomery until his untimely death in 1968. His strong belief in non-violent protest helped set the tone of the civil rights movement. Examples of the many actions King was involved with include:

The civil rights movement, largely due to the leadership of Martin Luther King, Jr., led to significant legislative change in the United States. Nonviolent actions and civil disobedience caused many highly-publicized crisis situations where the government was forced to take a stand or to take action with legislation. Boycotts, sit-ins, protests, and marches were eventually effective, and significant legislation was passed against racial discrimination. Notable legislation during this time included:

Martin Luther King received over fifty honorary college degrees as well as several prestigious awards during or because of the thirteen years that he was active in the civil rights movement. Examples include:

Throughout his life, Martin Luther King, Jr. was an author. He wrote many books and articles about his beliefs and experiences in the civil rights movement while fighting for African Americans. King’s writings include:

In early 1968 King became involved in a growing civil rights demonstration in Memphis, Tennessee. On February 12, 1968, 1,300 Black sanitation workers in Memphis began protesting their terrible working conditions, discrimination, and low pay. The American Federation of State, County, and Municipal Employees (AFSCME) and the workers demanded union recognition, higher wages and an end to discrimination. King went to Memphis three times to support the sanitation workers. The strike lasted 64 days, ending on April 12, 1968. King was assassinated in Memphis on April 3, the day after his last speech in support of the striking workers.

King was in Memphis, Tennessee on April 4, 1968, staying at the Lorraine Motel in room 306. In the evening, King was standing on the balcony, when he was struck by a bullet. King was rushed to the Saint Joseph Hospital. Although doctors attempted to save his life, he was pronounced dead shortly after his arrival. Martin Luther King was only 39 years old at the time of his death. The motel where he was shot is now the site of the National Civil Rights Museum.

A Life of Impact