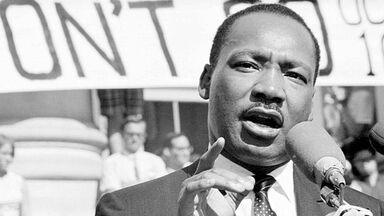 What did Martin Luther King, Jr. do to progress the civil rights movement? He stood as a pillar of hope and a model of grace. And he modeled sound leadership to the African American civil rights movement. Learn more about King’s life, contributions and accomplishments.

Who Was Martin Luther King Jr.?

Martin Luther King, Jr. was a well-known civil rights activist who had a great deal of influence on American society in the 1950s and 1960s. His strong belief in nonviolent protest helped set the tone of the movement. Boycotts, protests and marches were eventually effective, and much legislation was passed against racial discrimination.

Assassinated in 1968, King led a brief life filled with many great accomplishments working to promote equal treatment of all races. His nonviolent approach to protesting, his legions of followers and his true belief in the ability of mankind to live in peace went a long way toward the advancement of civil rights during this tumultuous time in history. King’s accomplishments are numerous. They include:

This is just a brief overview of the career of a great man and of his impact on the civil rights movement and the world.

In Montgomery, Alabama in 1955, King led a boycott against city buses that refused to let Blacks sit in the front seats. This stemmed from the incident where Rosa Parks refused to give up her seat on a bus. The protest gained followers rapidly, and it led to a citywide boycott of the bus system until the rules were changed.

Even though King and his followers were sent to jail, the boycott did succeed and the unfair, racist law allowing segregation aboard the buses was changed. History reports this as the boycott that put King on the map. He emerged as a leader in the civil rights movement while cementing his dedication to change via nonviolent methods.

In the late 1950s, King established the Southern Christian Leadership Conference as a national platform for him to provide his peaceful message of civil rights to the world. Because of his commitment to peace, nonviolence and equality, King’s civil rights protests made genuine headway in American society. Without question, Martin Luther King Jr. advanced the movement with his well-spoken elegance and grace.

King’s Use of Nonviolent Social Change

Even as his oppressors exercised force and brutality, King remained insistent on nonviolence. On January 30, 1956, King’s home was even bombed. Instead of responding in kind, he and his members took to church pews and prayed in protest of their violent discrimination.

King’s stark insistence on nonviolence was a major factor in the acknowledgment given to the civil rights movement during such a time of unrest. His genuine desire for the country to come together was recognized as a great contribution to America.

Martin Luther King,’s commitment to nonviolent protests and civil rights for all can be seen through his famous letter from a Birmingham Alabama jail. While jailed for a peaceful protest in 1963, King wrote an eloquent letter highlighting his philosophy of nonviolence. Explore an example of King’s mastery of the written word.

“Perhaps it is easy for those who have never felt the stinging darts of segregation to say, ‘Wait.’ But when you have seen vicious mobs lynch your mothers and fathers at will and drown your sisters and brothers at whim; when you have seen hate filled policemen curse, kick and even kill your black brothers and sisters; when you see the vast majority of your twenty million Negro brothers smothering in an airtight cage of poverty in the midst of an affluent society; when you suddenly find your tongue twisted and your speech stammering as you seek to explain to your six year old daughter why she can’t go to the public amusement park that has just been advertised on television …”

In 1963, King and other leaders of the civil rights movement organized a huge march for equal rights in Washington, D.C. With a massive crowd of over 200,000 followers, the march protested racial discrimination in schools and the workforce. They demanded minimum wage for all workers. It was the largest gathering in Washington, D.C.’s history.

I Have a Dream Speech

This was the site of King’s famous I Have a Dream speech. His speech marked him as a master orator, capable of punching his points with anaphoras — words or phrases repeated for emphasis — while citing powerful sources, including the Bible and the U.S. Constitution.

As a result of the march and the speech, the citizens of the nation began to put growing pressure on the presidential administration of Lyndon B. Johnson. They encouraged the president to push for civil rights laws to pass through Congress and become recognized on a national level.

In 1968, 1,300 black sanitation workers in Memphis were protesting their terrible working conditions, discrimination and low pay. It was obvious they were discriminated against when they were sent home without pay while white workers stayed on the job. They started a strike on February 12, 1968. Shortly thereafter, Martin Luther King Jr. came to Memphis to speak and support the second march of the sanitation workers.

The strike lasted for 64 days and grew into one of the major civil rights events. The American Federation of State, County, and Municipal Employees (AFSCME) and the sanitation workers demanded higher wages, union recognition and an end to discrimination.

This attracted the national news media as well as others who joined the cause, like community leaders and members of the clergy. The strike finally ended on April 12, 1968, and the city of Memphis agreed to the workers’ demands even though more strikes had to be threatened to make them honor the agreement.

King’s civil rights movement lasted from around 1955 to 1968. Its goals were to abolish racial discrimination in many areas including public transportation, employment, voting, and education.

Nonviolent protests and civil disobedience during this time caused many crises, forcing the government to intervene. The protests consisted of sit-ins, marches and boycotts. Notable legislation during this time included the:

On the evening of April 4, 1968, Martin Luther King, Jr. was standing out on his second-story balcony at the Lorraine Motel in Memphis, Tennessee. He was there to support the Memphis Sanitation Workers’ strike. While he stood in the evening light, a sniper bullet struck him in the jaw, severing his spinal cord, and killing him. He was only 39 years old.

In the end, a criminal named James Earl Ray was convicted of his murder and sentenced to 99 years in prison. Ray initially pleaded guilty to avoid the electric chair and then later attested he was set up as part of a larger government conspiracy. King’s widow and children actually believe his murder was part of a conspiracy involving the U.S. government, too.

King single-handedly moved the needle on the civil rights movement, advocating for dignity, respect, freedom, and equality. His high moral probity allowed him to stand calmly in the face of intense violence, proving love (or at least respect) does conquer all. Read some more facts on this great man, or check out our Martin Luther King, Jr. timeline. You might also enjoy learning some Black history facts for Black History Month.