‘Mad Men’ begins at the fictional Sterling Cooper agency on Madison Avenue in Manhattan, New York. And in the latter half of the series, at the freshly created firm of Sterling Cooper Draper Pryce.

The series’ main character is the womanizing advertising executive Don Draper (played by Jon Hamm), who is the talented creative director at Sterling Cooper, and later a commencement partner at Sterling Cooper Draper Pryce. The plot tracks the characters in their personal and professional lives. As the series progresses, it depicts the ever-changing moods and social norms of the United States throughout the ’60s and ’70s. The characters consist of Don Draper, Betty Draper, Joan Harris, Roger Sterling, Peggy Olson, Pete Campbell, Bert Cooper, and Matthew Weiner.

‘Mad Men’ received widespread approval for its writing, acting, directing, visual style, and historical authenticity; it also won several awards. It also has many famous quotes and sayings that we have collected for you.

The Best ‘Mad Men’ Quotes To Live By

Here are some of the best ‘Mad Men’ quotes from Roger, Peggy and more, that we have collected for you. If you don’t know ‘Mad Men’ very well, this is a good place to start!

1. “Make it simple, but significant.”

3. “If you don’t like what’s being said, change the conversation.”

4. “This is America. Pick a job and become the person who does it.”

5. “He may act like he wants a secretary, but most of the time they’re looking for something between a mother and a waitress.”

6. “One never knows how loyalty is born.”

7. “Am I to entertain your ballad of dissatisfaction, or has something actually happened? Because I am at work, dear.”

9. “Men don’t take time to end things. They ignore you until you insist on a declaration of hate.”

10. “Roy: Perpetuating the lie. How do you sleep at night?

Don Draper: On a bed made of money.”

Some hilarious ‘Mad Men’ quotes that readers will love every time, from Peggy, Don and more.

12. “I keep going to a lot of places and ending up somewhere I’ve already been.”

13. “I should’ve known it was near the end. Every time an old man starts talking about Napoleon, you know they’re going to die.”

15. “Well, you know what they say about Detroit. It’s all fun and games till they shoot you in the face.”

17. “That poor girl. She doesn’t know that loving you is the worst way to get to you.”

19. ““Who knows why people in history did good things? For all we know Jesus was trying to get the loaves and fishes account.”

20. “I don’t think I ever wanted to be the man who loves children. But from the moment they’re born, that baby comes out and you act proud and excited and hand out cigars.”

Here are some ‘Mad Men’ quotes for Don Draper fans.

22. “What you call love was invented by guys like me… to sell Nylons.”

24. “We’re flawed because we want so much more. We’re ruined because we get these things and wish for what we had.”

25. “Nostalgia: It’s delicate but potent… In Greek, ‘nostalgia’ literally means ‘the pain from an old wound.’ It’s a twinge in your heart far more powerful than memory alone.”

26. “You’re good. Get better. Stop asking for something.”

27. “It’s useless to be creative unless you can sell what you create.”

29. “I’m glad this is an environment where you feel free to fail.”

Here are some Joan ‘Mad Men’ quotes for our readers.

31. “I am not a solution to your problems. I am another problem.”

32. “Go home, take a paper bag, and cut some eye hole out of it. Put it over your head, get undressed and look at yourself in the mirror. Evaluate where your strength and weaknesses are.”

33. “Sometimes when people get what they want, they realize how limited their goals were.”

34. “You want to be taken seriously? Then don’t dress like a little girl.”

35. “Remember, when you are over there in the jungle, and they are shooting at you – you’re not dying for me. Because I don’t like you or never will.”

36. “I’m in charge of thinking of things before people know they need them.”

37. “They just want you to be as miserable as they are. I say let them have it.”

39. “If they’ve tried to make you feel you’re different from them, you are. That’s a good way to be.”

40. “I’m glad the army makes you feel like a man. Because I’m sick and tired of trying to do it.”

Here are some one-liner ‘Mad Men’ quotes that we have collected for you.

41. “Those people – in Manhattan – they are better than us. Because they want things they haven’t seen.”

43. “I’m just acknowledging that life, unlike this analysis, will eventually end, and somebody else will get the bill.”

44. “Is this some sort of thing like in the movies where I have a gun and you don’t think I’m going to shoot you?”

46. “Change is neither good or bad; it simply what life is.”

47. “Peggy, just think about it. Deeply. Then forget it. And an idea will jump up in your face.”

49. “Our worst fears lie in anticipation.” 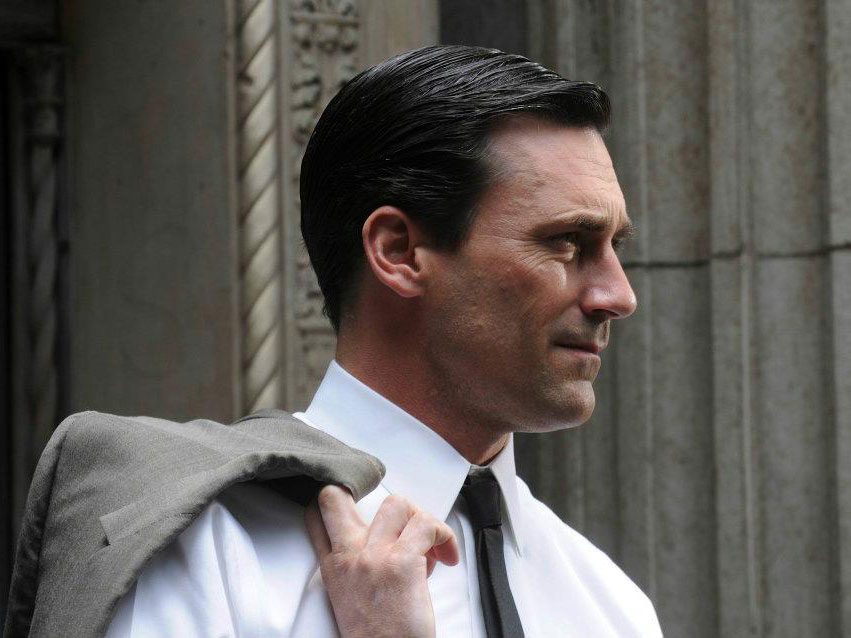 “You’re painting a masterpiece, make sure to hide the brushstrokes.” – Betty Draper, Mad Men, Season 1, Episode 7, “Red in the Face” 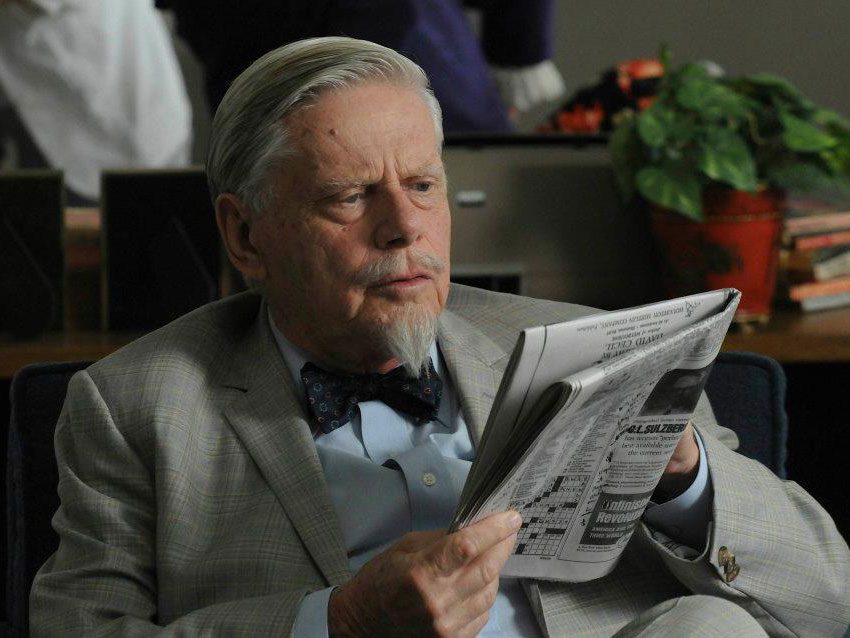 “You’re going to need a stronger stomach if you’re going to be back in the kitchen seeing how the sausage is made.” – Bert Cooper, Mad Men, Season 1, Episode 4, “New Amsterdam” 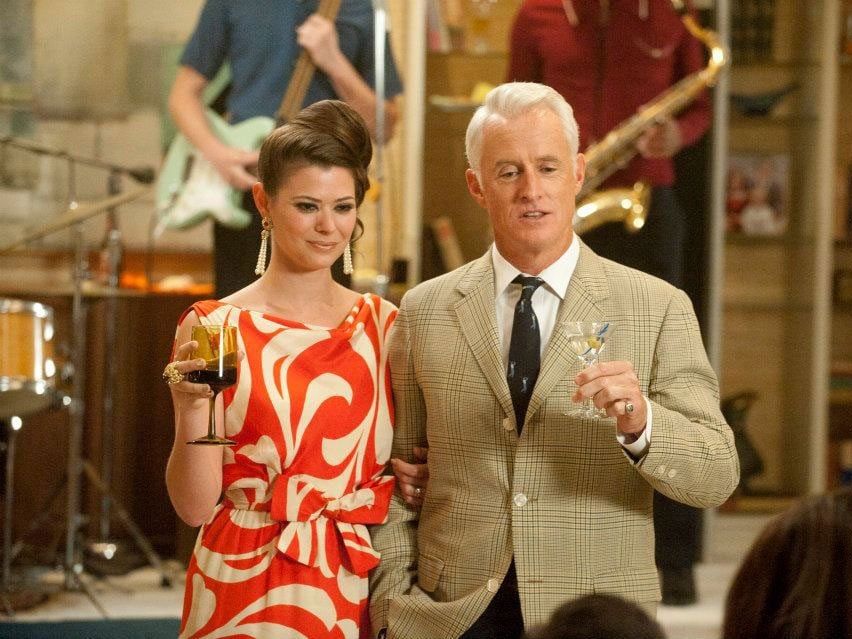 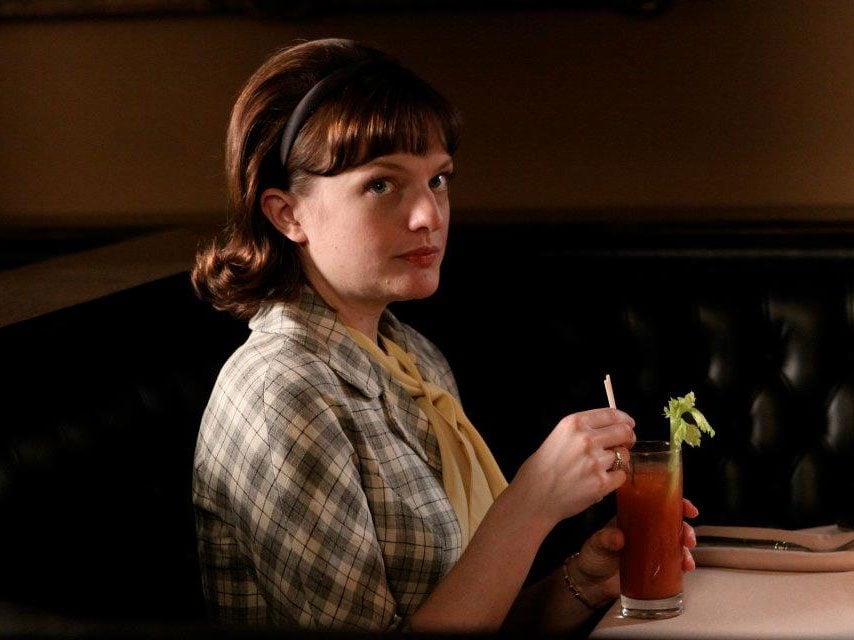 “You need three ingredients for a cocktail. Vodka and Mountain Dew is an emergency.” – Peggy Olson, Mad Men, Season 4, Episode 9, “The Beautiful Girls” 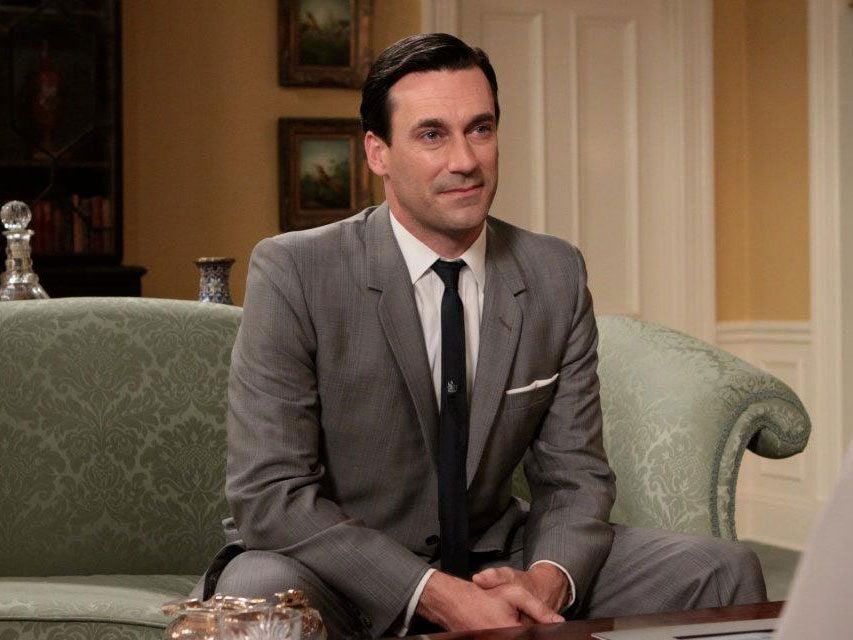 “If you don’t like what’s being said, change the conversation.” – Don Draper, Mad Men, Season 3, Episode 2, “Love Among the Ruins” 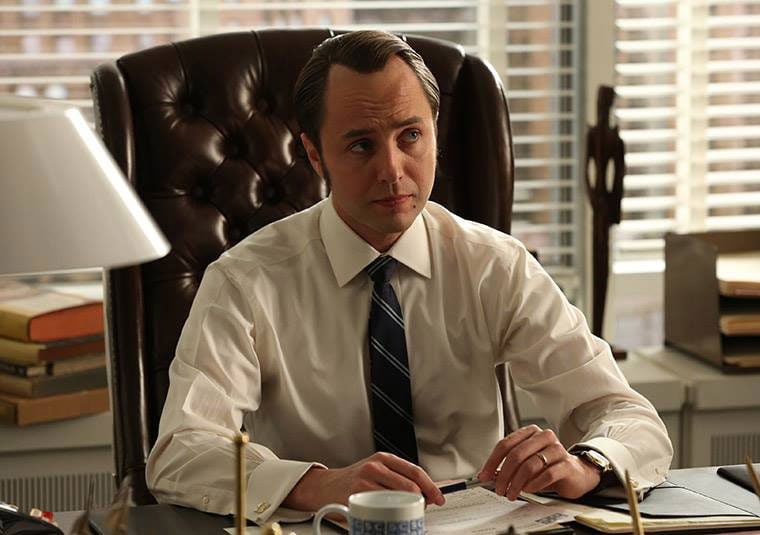 “Jiminy Christmas… You think you’re going to begin your life over and do it right, but what if you never get past the beginning again?” – Pete Campbell, Mad Men, Season 7, Episode 9, “New Business” 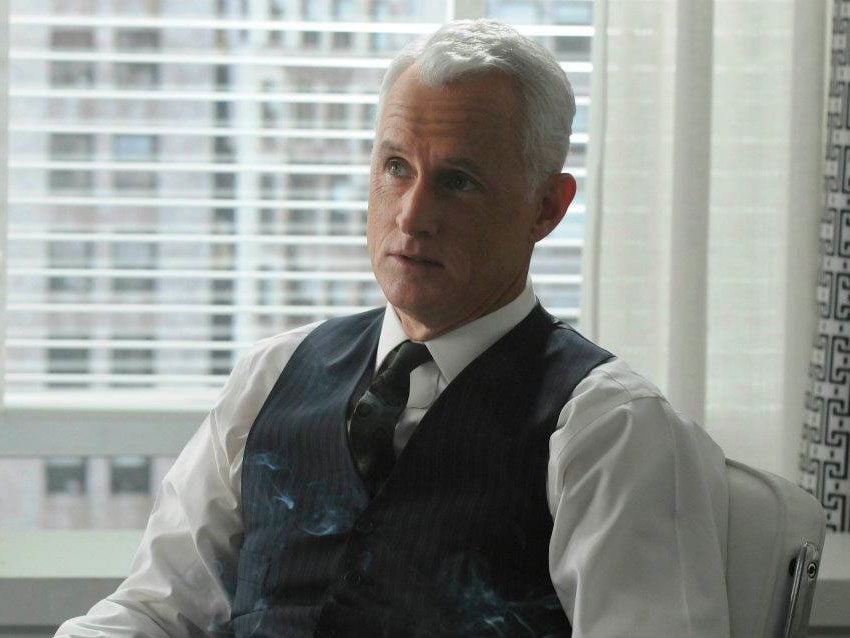 “Who knows why people in history did good things? For all we know Jesus was trying to get the loaves and fishes account.” – Roger Sterling, Mad Men, Season 5, Episode 7, “At the Codfish Ball” 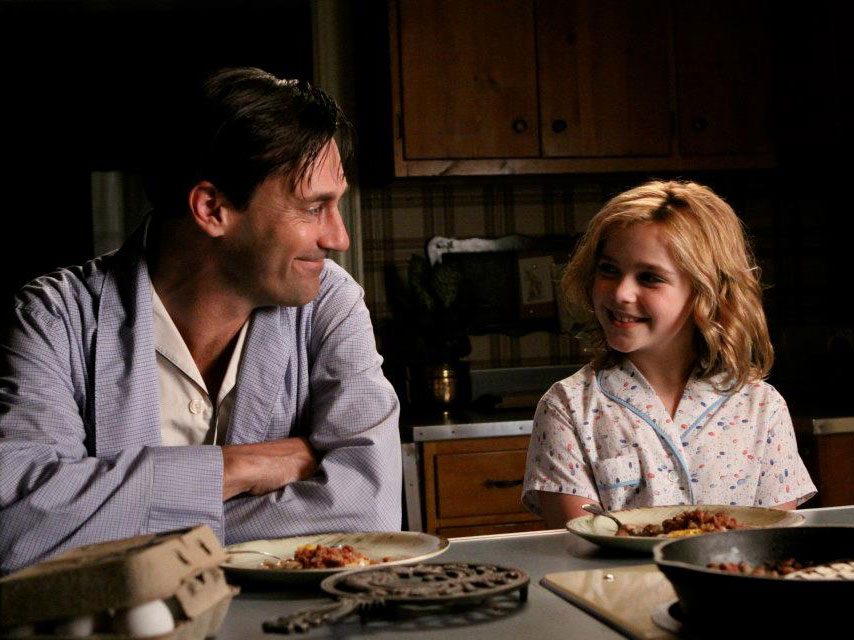 “I only ever wanted to be the man who loves children. But from the moment they’re born and that baby comes out, you act proud and excited and hand out cigars, but you don’t feel anything, especially if you had a difficult childhood. You want to love them, but you don’t and the fact that you’re faking that feeling makes you wonder if your own father had the same problem. Then one day, they get older and you see them do something and you feel that feeling that you were pretending to have and it feels like your heart is going to explode.” – Don Draper, Mad Men, Season 6, Episode 5, “The Flood” 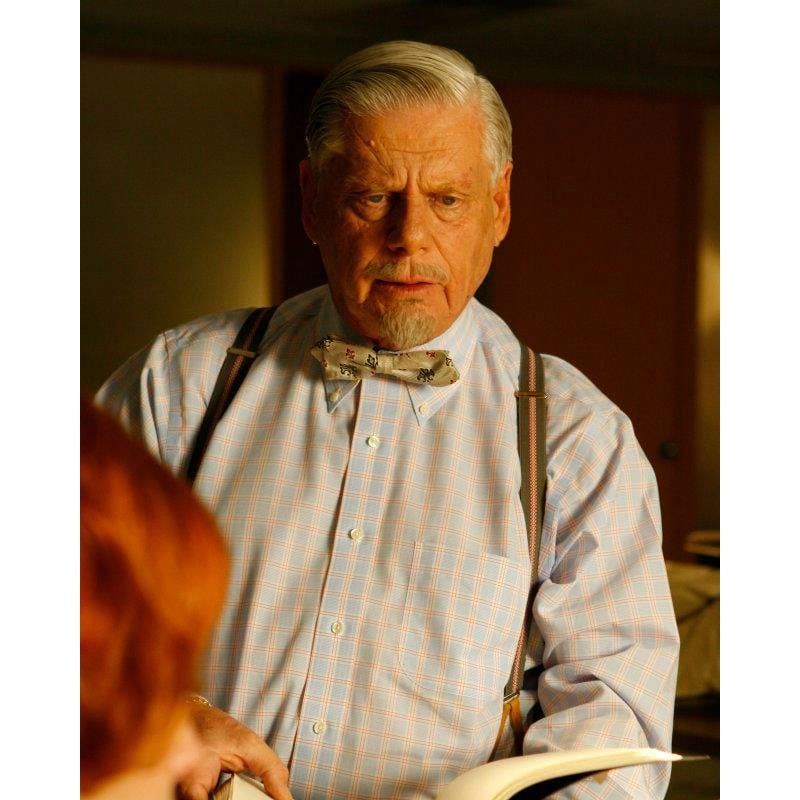 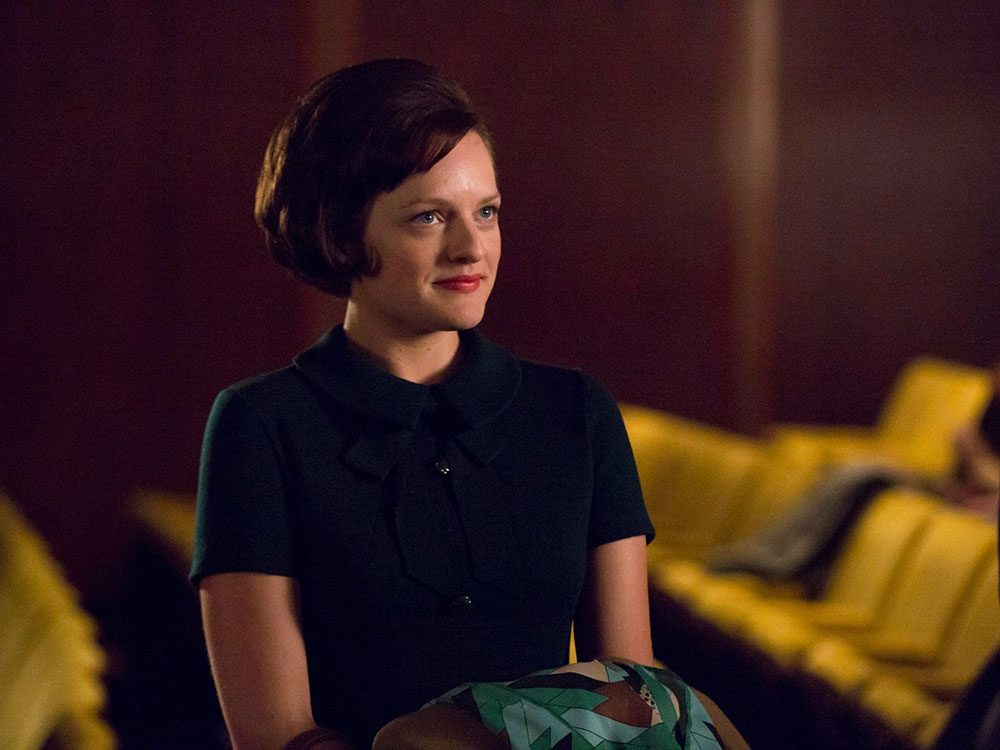 “One day you’re there and then all of a sudden, there’s less of you and you wonder where that part went; if it’s living somewhere outside of you. And you keep thinking maybe you’ll get it back and then you realize it’s just gone.” – Peggy Olson, Mad Men, Season 2, Episode 13, “Meditations in an Emergency” 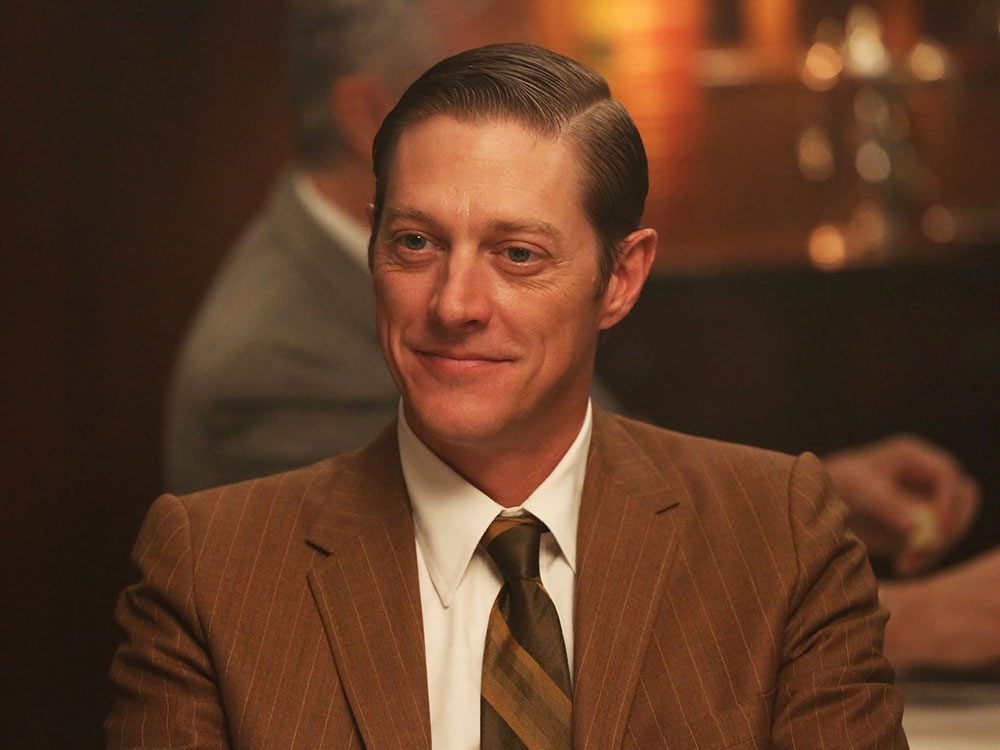 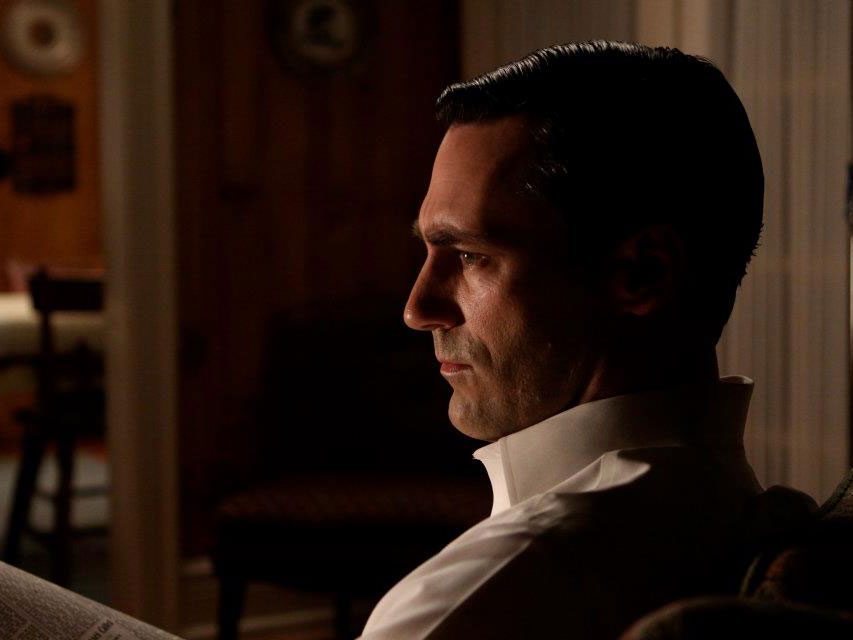 “Just think about it deeply, then forget it, and an idea will jump up in your face.” – Don Draper, Mad Men, Season 1, Episode 11, “Indian Summer” 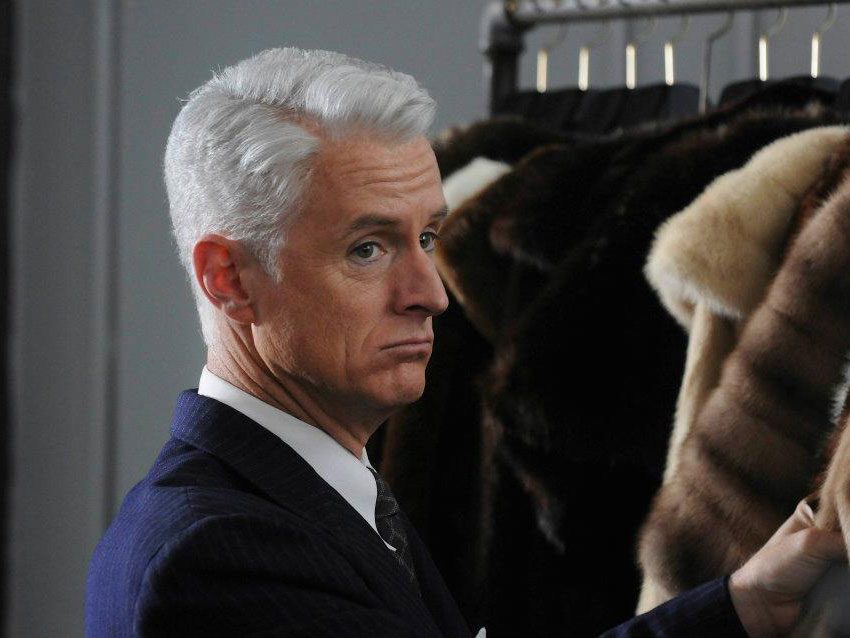 “I don’t know if anybody’s ever told you that half the time this business comes down to, ‘I don’t like that guy.’” – Roger Sterling, Mad Men, Season 3, Episode 5, “The Fog” 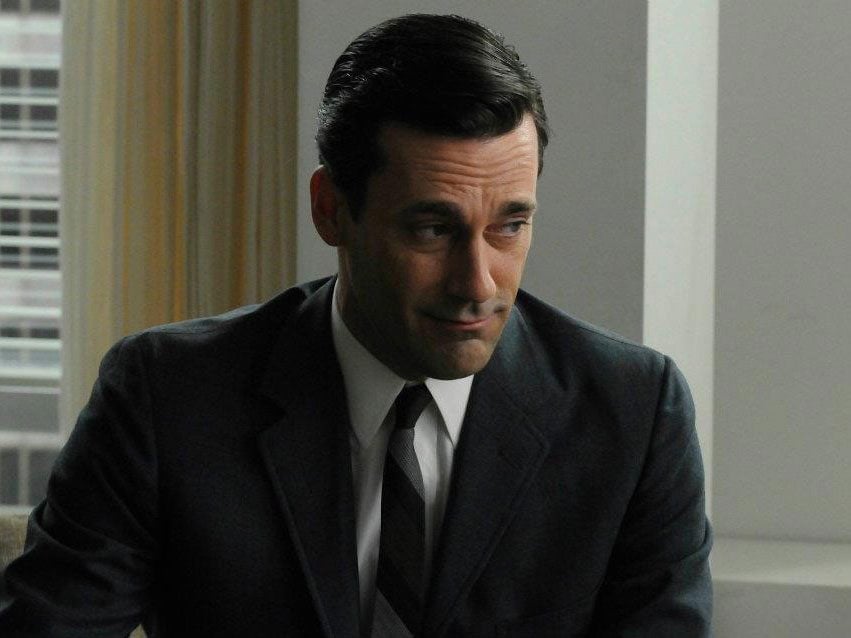 Don Draper on the importance of alibis

“It wasn’t a lie, it was ineptitude with insufficient cover.” – Don Draper, Mad Men, Season 1, Episode 3, “Marriage of Figaro” 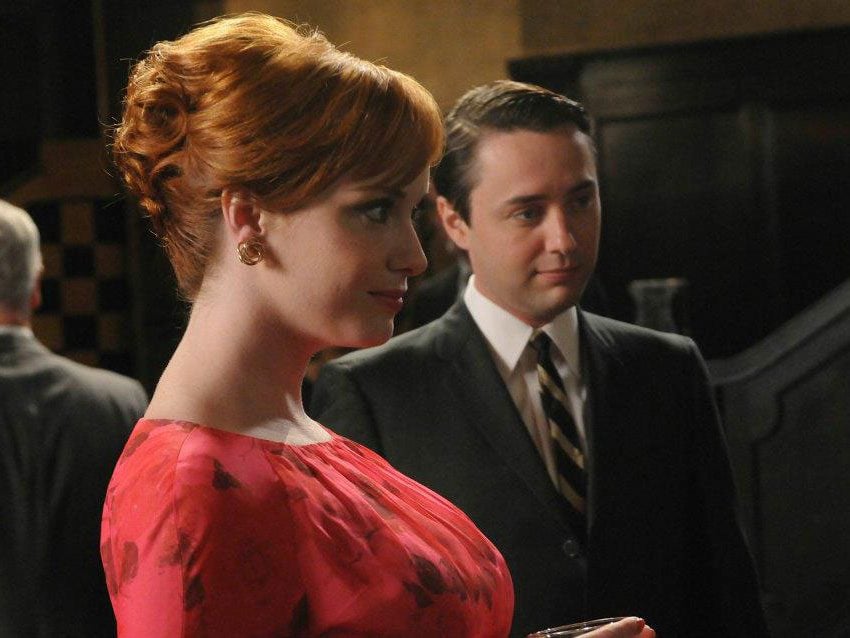 “Men don’t take time to end things, they ignore you until you insist on a declaration of hate.” – Joan Harris, Mad Men, Season 5, Episode 7, “At the Codfish Ball” 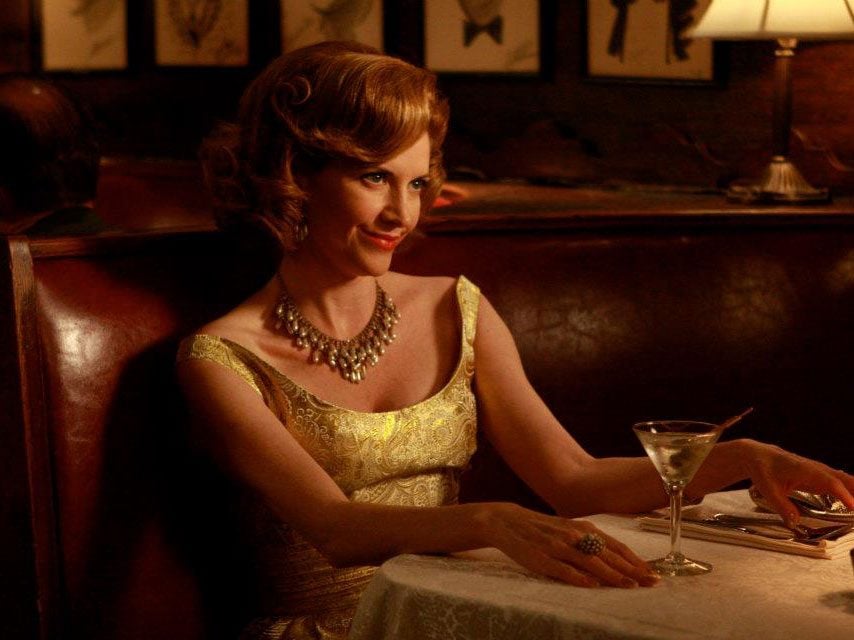 “This is America. Pick a job and become the person who does it.” – Bobbie Barrett, Mad Men, Season 2, Episode 5, “The New Girl” 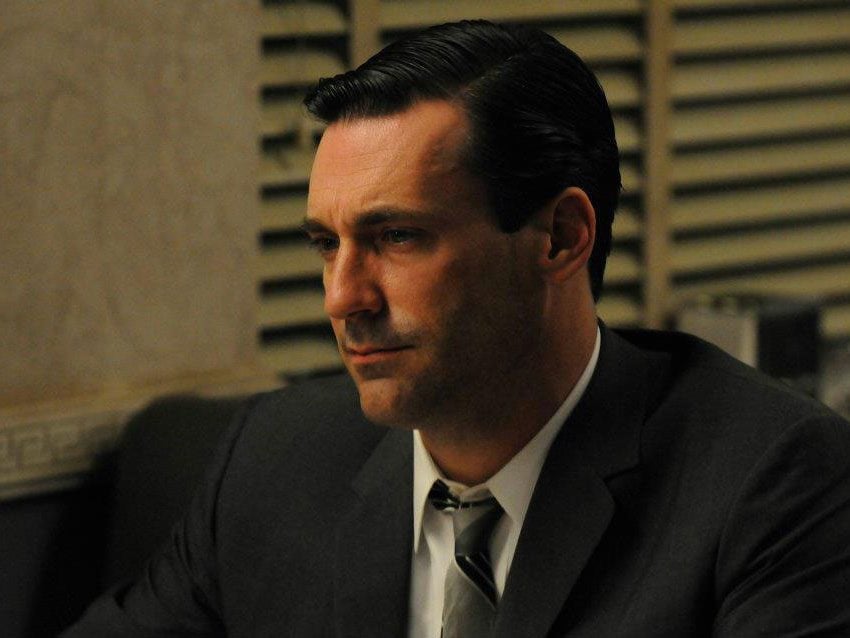 “People want to be told what to do so badly that they’ll listen to anyone.” – Don Draper, Mad Men, Season 1, Episode 6, “Babylon” 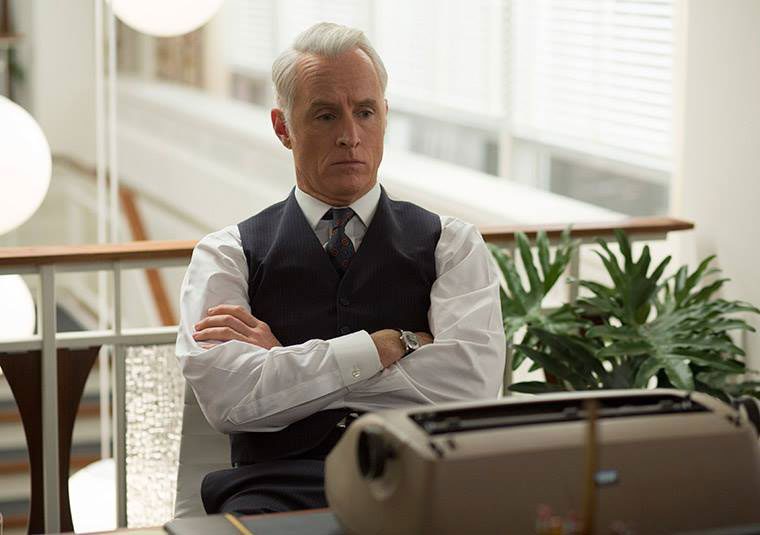 “I should have known it was near the end. Every time an old man starts talking about Napoleon, you know they’re going to die.” – Roger Sterling, Mad Men, Season 7, Episode 7, “Waterloo” 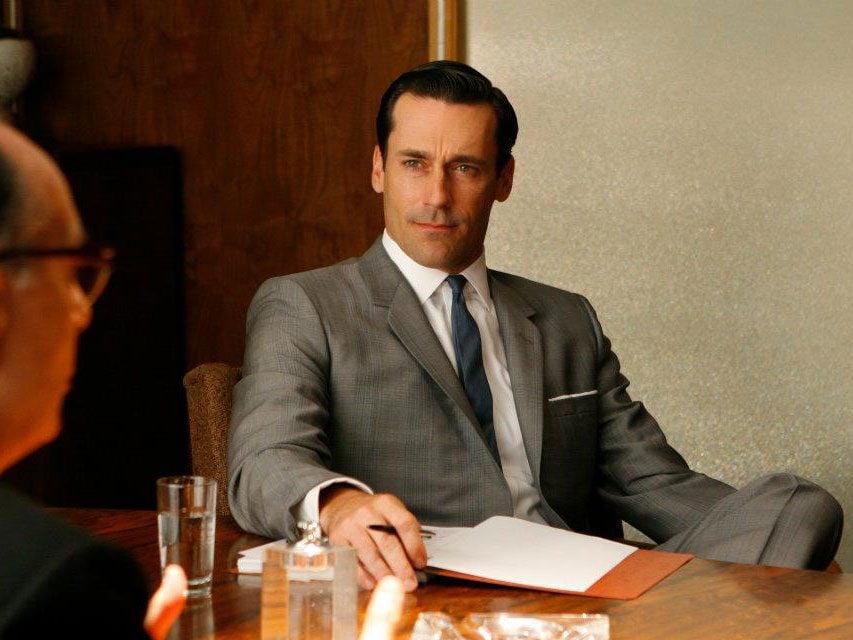 “I hate to break it to you, but there is no big lie. There is no system. The universe is indifferent.” – Don Draper, Mad Men, Season 1, Episode 8, “The Hobo Code”