We followed these six wonderful weirdos around Seaside Heights, New Jersey as they spent their days working in a souvenir tee-shirt store and their nights drinking and partying excessively. They were almost Shakespearean in the way that they created words and phrases, and implemented them into the modern English language with such ease and grace that I think many of us have forgotten their original origins were rooted near the beaches of New Jersey. You may recognize phrases like “DTF” and “Granade”. They all washed up on those beaches with a margarita and a spray tan and a low tolerance for alcohol.

After three seasons of the Jersey shore, MTV execs decided to take the show on the road and head down to Florida for season four. This was moderately well received, so somehow a plan was put in place to do another season on the road. In Italy. Sensing that most of the cast identified as Italian, the idea was to highlight the juxtaposition of daily life in Italy vs. the daily life of Italian-Americans on the Jersey shore. It was the strangest season of all.

No matter where in the world we found our cast, we all tuned in to laugh, cry, celebrate, fight, drink, and fist pump with our favorite cast of characters. And I think I speak for all of us when I say, I don’t regret a moment I spent watching their show.

1. It’s always good to break your only rule. 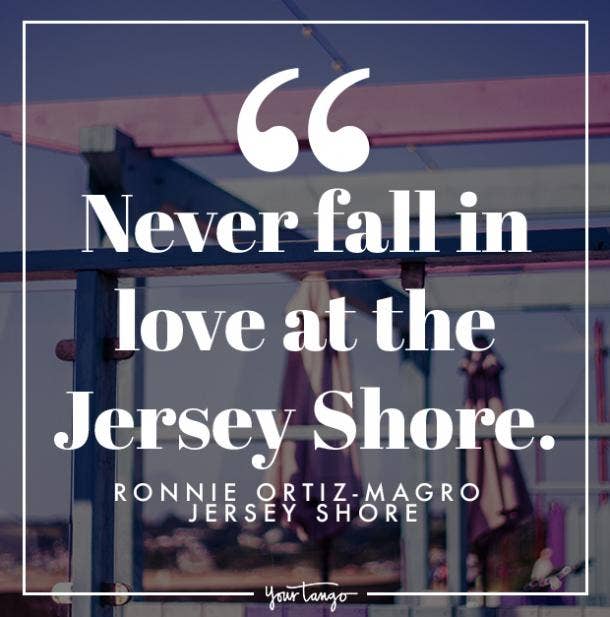 “My only rule: Never fall in love at the Jersey Shore.” — Ronnie Ortiz-Magro

“You have to remember that reality shows capture your worst moments.” — Nicole Polizzi (Snooki)

3. Everyone loves the situation.

“Everybody loves me, babies, dogs, ya know, hot girls, cougars. I just have unbelievable mass appeal.” — Mike Sorrentino (The Situation)​

5. The same rule my mother taught me, and I will one day teach my daughter.

“It sucks, but no Long Islands or margaritas when you drink. It has to be straight vodka.” — Nicole Polizzi (Snooki)

“I am like a praying mantis, after I have sex with a guy I will rip their heads off.” — Jennifer Farley (JWoww)

8. You’re on a desert island and you can only bring one thing…

“There’s no way I’m going to Jersey without my hair gel, can’t leave without my gel.” — Paul DelVecchio (Pauly D)

9. Not everyone was that strong. 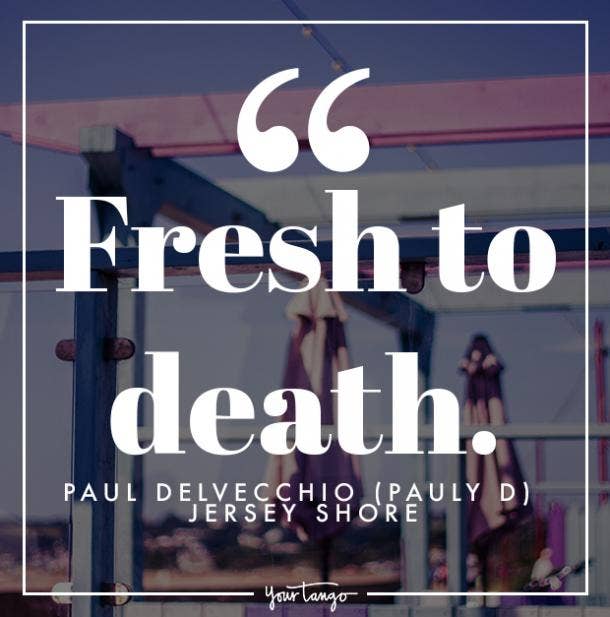 11. I bet it has something to do with the praying mantis thing she was talking about.

“I have a bad habit of playing little emotional games with men. When they date me it’s cool in the beginning, we do our thing in the first month, and then I send them on a rollercoaster ride to hell.” — Jennifer Farley (JWoww)

“I think the Statue of David is pretty sexy. I’d do him.” — Deena Nicole Cortese

13. I think that would be half past two, actually.

“I don’t follow trends. I set my own and I go for the extreme.” — Jennifer Farley (JWoww)

“If you’re not a Guido then you can get the f*ck outta my face.” — Samantha Giancola (Sammi Sweetheart)

17. I don’t think these are the “grenades” they’re usually talking about.

“I told Pauly D to start the grill and he puts charcoal in a gas grill, then he asks me to light it and we were this close to pretty much blowing up the house.”— Mike Sorrentino (The Situation)

“Before Jersey Shore, I was a DJ struggling to promote, deejaying six nights a week and hustling to pack clubs.” — Paul DelVecchio (Pauly D)

19. This is where Ronnie went wrong.

“I’m not trying to fall in love on the Jersey Shore. I’m just trying to hook up.” — Paul DelVecchio (Pauly D) 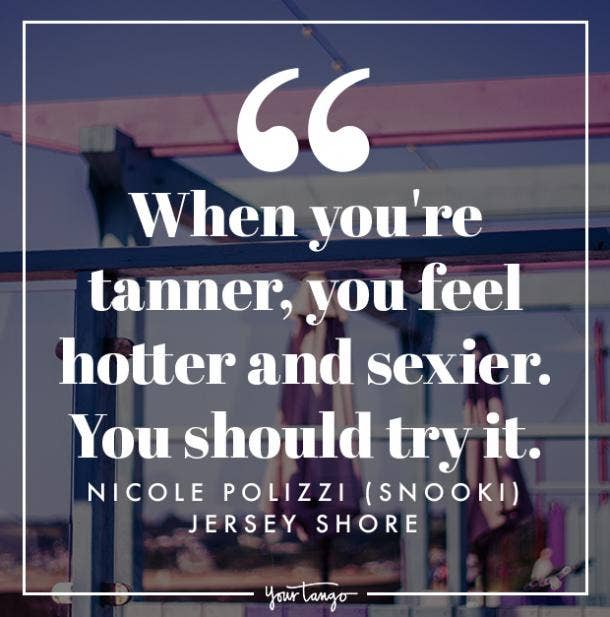 “When you’re tanner, you feel hotter and sexier. You should try it” — Nicole Polizzi (Snooki)

“I like to be with my boyfriend at all times. Do you get that?” — Samantha Giancola (Sammi Sweetheart)

22. All the ladies, who truly feel me, throw your hands up at me.

“Yes, I had sex. Like, hello, you’re gonna have sex if you’re into somebody. It’s natural.” — Samantha Giancola (Sammi Sweetheart)

23. The Jersey Shore is the hottest planet.

“Men may be from Mars and women from Venus, but I’m from the Jersey Shore.” — Jennifer Farley (JWoww)

24. Mike can see into the hearts of his housemates.

“It’s obvious that Sammi has a crush on me and that’s obvious. It goes back to the days of prehistoric kindergarten.” — Mike Sorrentino (The Situation)

“Down here at the Shore, one minute you’ve got three girls in the Jacuzzi, the next minute somebody’s in jail and you have to bail them out. That’s what happens down at the Shore.” — Mike Sorrentino (The Situation)

27. My girl knows her politics.

“My abs are so ripped up, it’s called; the Situation.” — Mike Sorrentino (The Situation)

29. If memory serves, I don’t think this is a factual account of this fight.

“This is probably the best accomplishment I’ve had in a long time. To kick the sh-t out of Jenni.” — Samantha Giancola (Sammi Sweetheart) 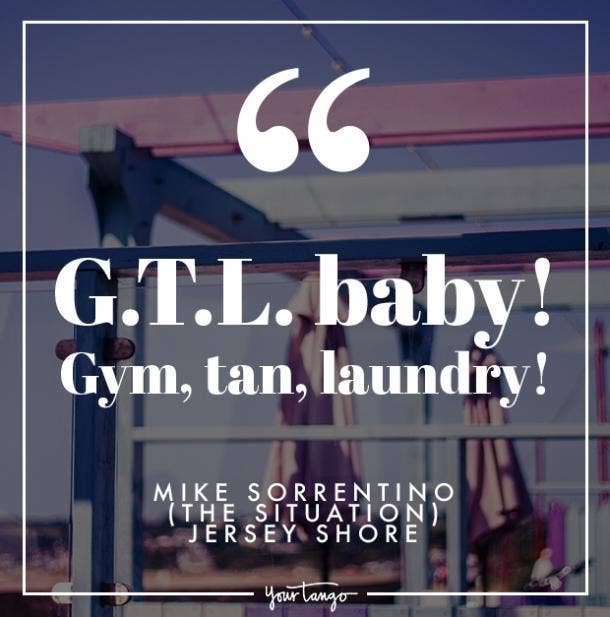 “Being called Angelina is like one of the worst things you could ever be called.” — Paul DelVecchio (Pauly D)

32. Tanorexic: Addicted to tanning or being tan.

33. I think we can all agree that the Keto Guido has it together.

“You never really see me acting a fool on TV.” — Vinny Guadagnino

36. Maybe the smartest thing Snooki has ever said.

“I’m trying to build an empire, because after this, I cannot get a normal job.” — Nicole Polizzi (Snooki)

“[on Deena] I thought she was gonna be hot. I’m all taken aback.” —​ Samantha Giancola (Sammi Sweetheart)

“A walking holiday? What does that mean? Are you gonna give out candy? Like I don’t get it.” — Samantha Giancola (Sammi Sweetheart) 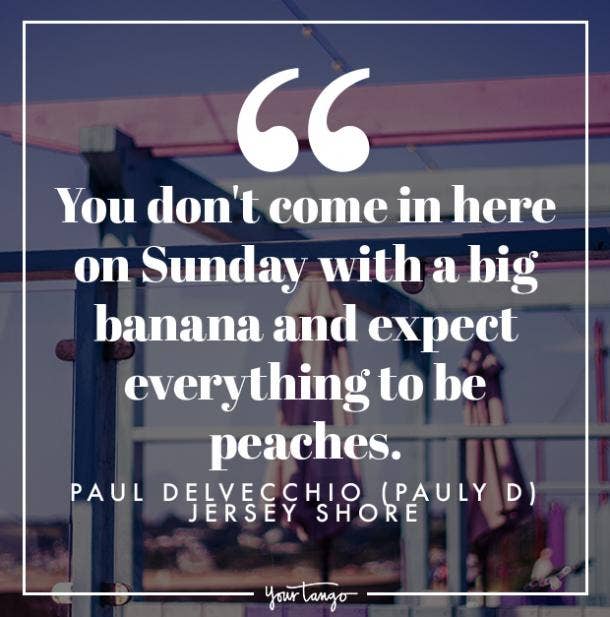 “You don’t come in here on Sunday with a big banana and expect everything to be peaches.” — Paul DelVecchio (Pauly D)

41. Again, Sammi, I think you misremember what really happened here.

“How does it feel, Jenni, to have the crap beat out of you by me? I’m basking in it right now.” — Samantha Giancola (Sammi Sweetheart)

42. Can you think of any other type of hunting that works this way?

“I don’t eat friggin’ lobster or anything like that. Because they’re alive when you kill it.” — Nicole Polizzi (Snooki)

44. It’s hard to find yourself in that sentence.

“It’s hard for people to see you one way, but you’re really the other way, so it’s kind of like, ‘Who am I, who are you?’ Sometimes, I confuse even myself.” — Nicole Polizzi (Snooki)

45. Well as long as it’s soccorproof, that’s all that counts.

“My hair didn’t even move an inch and I was in and out of the water. My hair’s windproof, waterproof, soccerproof, motocycleproof. I’m not sure if my hair’s bulletproof I’m not willin’ to try that.” — Paul DelVecchio (Pauly D)

46. JWoww has a weird understanding of nunneries.

“I’ve been a nun. A Catholic nun.” — Jennifer Farley (JWoww)

“I took the LSAT the day ‘Jersey Shore’ premiered, and after that I was too busy to go to law school.” — Vinny Guadagnino

“I have a bad habit of playing little emotional games with men. When they date me it’s cool in the beginning, we do our thing in the first month, and then I send them on a rollercoaster ride to hell.” — Jennifer Farley (JWoww)

“Is there a moon in this country?” — Nicole Polizzi (Snooki)

50. We’d all be lucky to have a friend like Sammi Sweetheart. 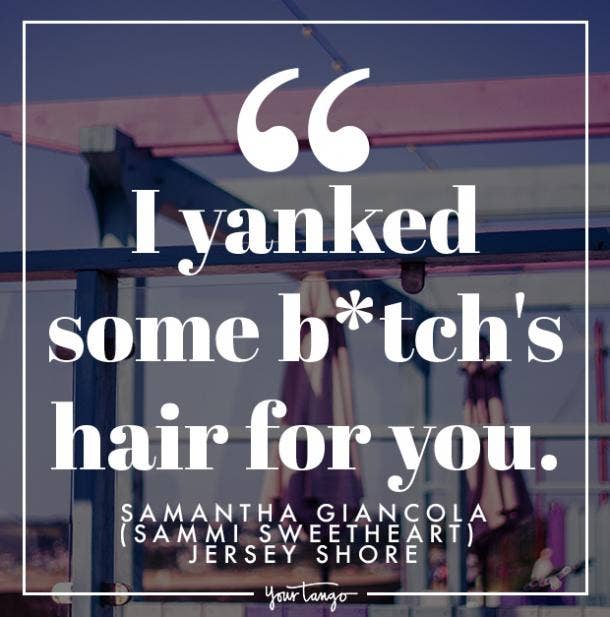 “I yanked some bitch’s hair for you.” — Samantha Giancola (Sammi Sweetheart)

51. Pauly D puts everything in perspective.

“You are the worst argument person ever.” — Mike Sorrentino (The Situation) 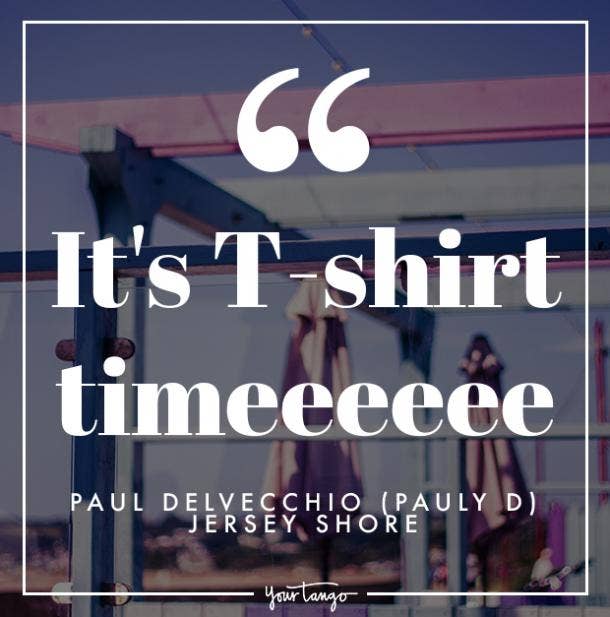