It can be tempting to throw in the towel. You might even have walked away from what you really wanted believing that maybe this battle was not one you could win.

When you feel like you’re on the verge of giving up, these fight quotes will help give you the boost you need to keep fighting the good fight against all odds.

You may wish you could take a small break to think through a new strategy, or you may have thought you already quit for good and now find yourself wanting to get back in the ring again.

Sometimes walking away is exactly what you need in order to gain perspective and return to shatter the wall that keeps you from your dreams.

You wouldn’t be the first person to believe the path you’re on is too tough to handle.

Defeat doesn’t have to be permanent. As long as you remain willing to get up and try again, there’s no stopping you from attaining your dreams. If you want something bad enough, realize that it’s your tenacity that can get you to where you are headed.

Sometimes half the struggle is just hanging in there until the miracle happens.

Whatever the struggle may be, you can decide that no matter how tough it gets, you will stay true to your goals — even if life knocks you down, you will get back up again and never stop fighting.

1. “If you have a dream, don’t just sit there. Gather courage to believe that you can succeed and leave no stone unturned to make it a reality.” ― Roopleen 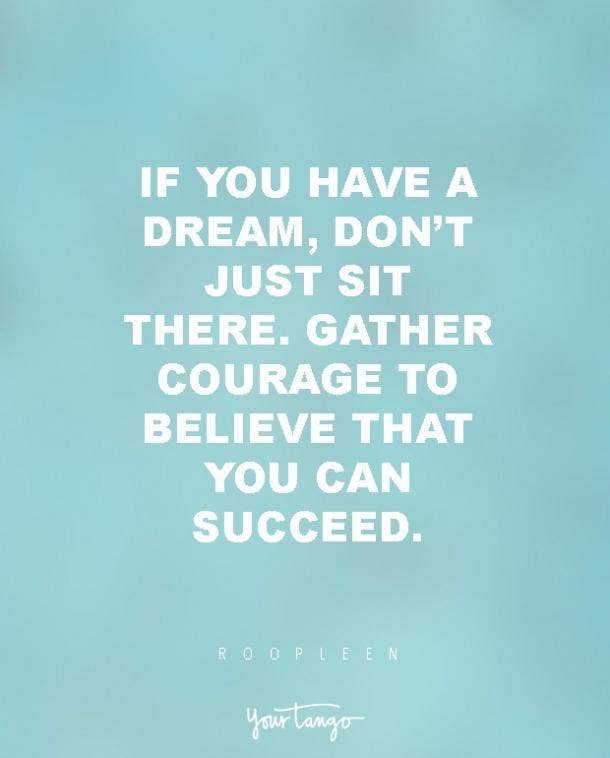 2. “When the going gets tough, put one foot in front of the other and just keep going. Don’t give up.” ― Roy T. Bennett, ‘The Light in the Heart’ 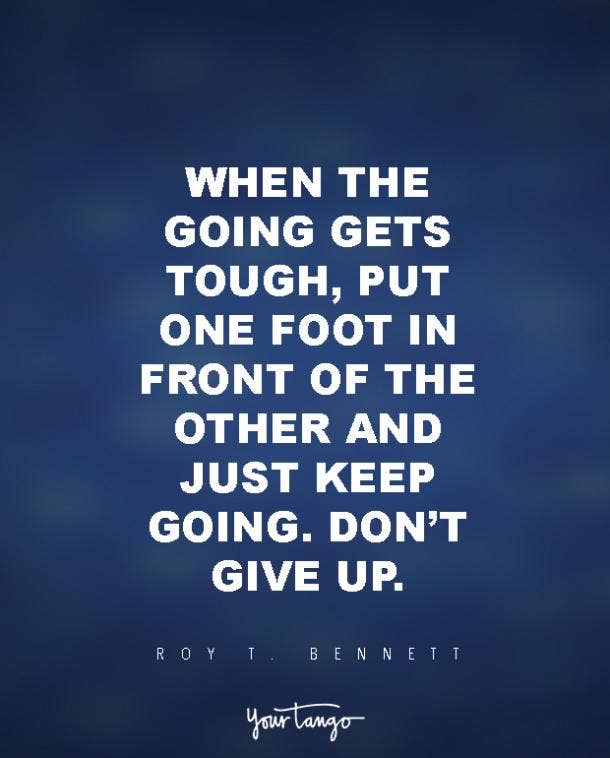 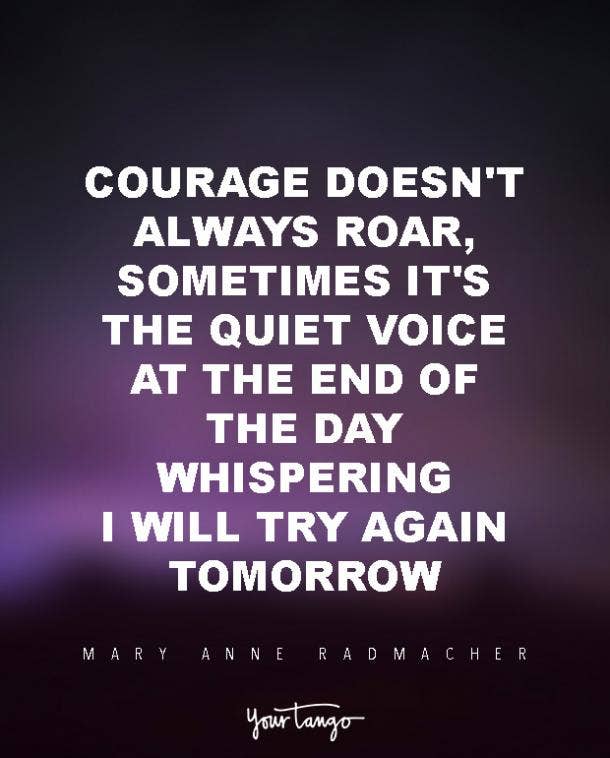 4. “Success is the sum of small efforts, repeated day in and day out.” — Robert Collier 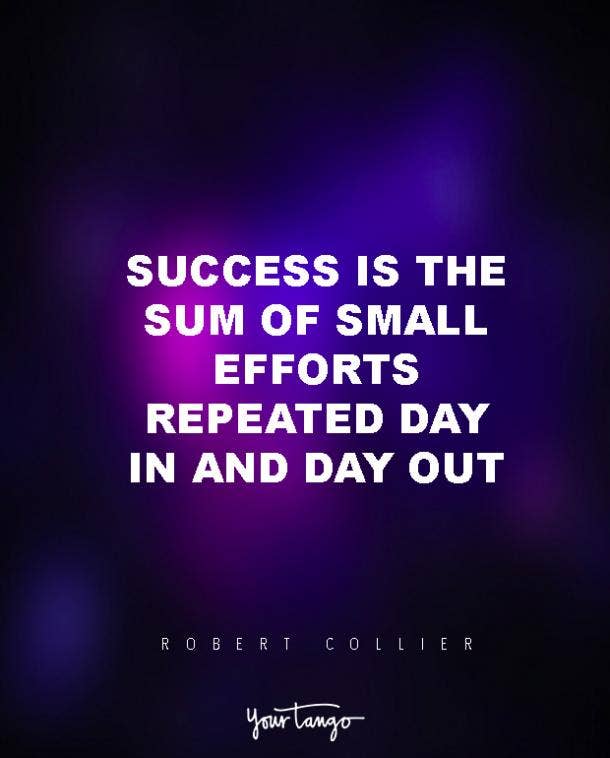 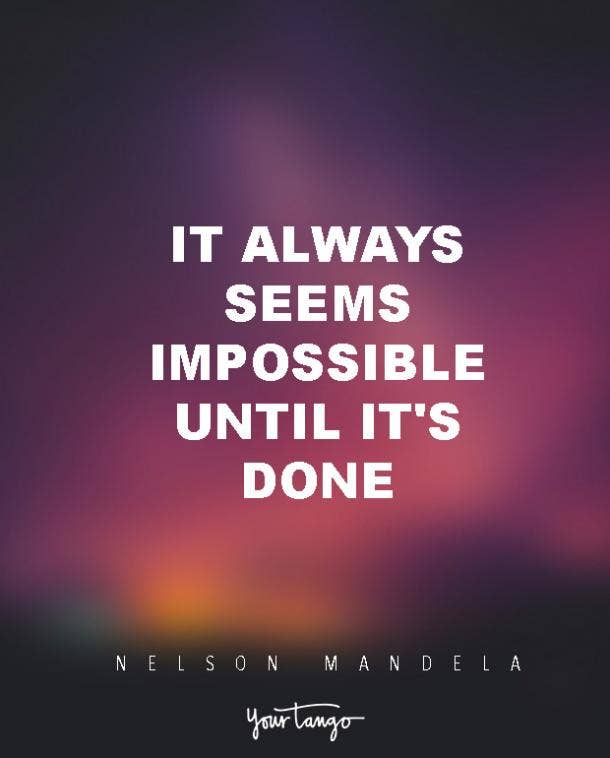 6. “It does not matter how slowly you go so long as you do not stop.” — Confucius 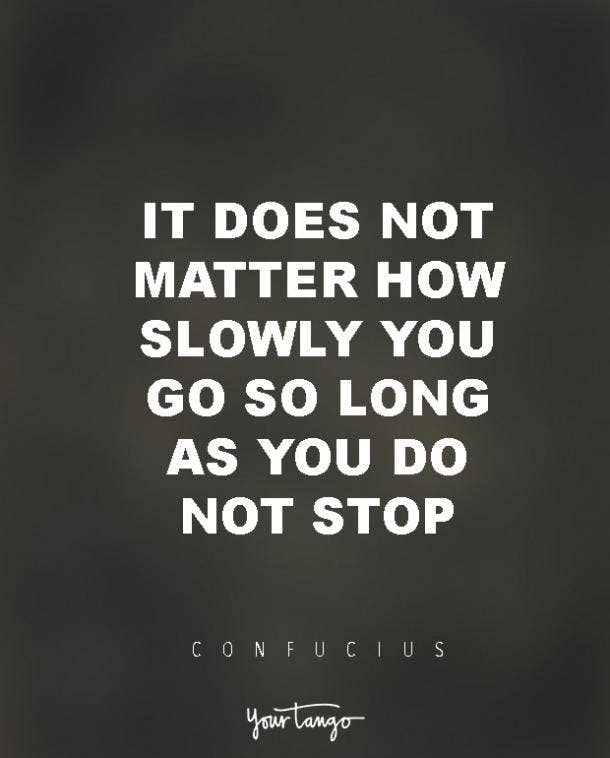 7. “Let me tell you the secret that has led to my goal. My strength lies solely in my tenacity.” — Louis Pasteur 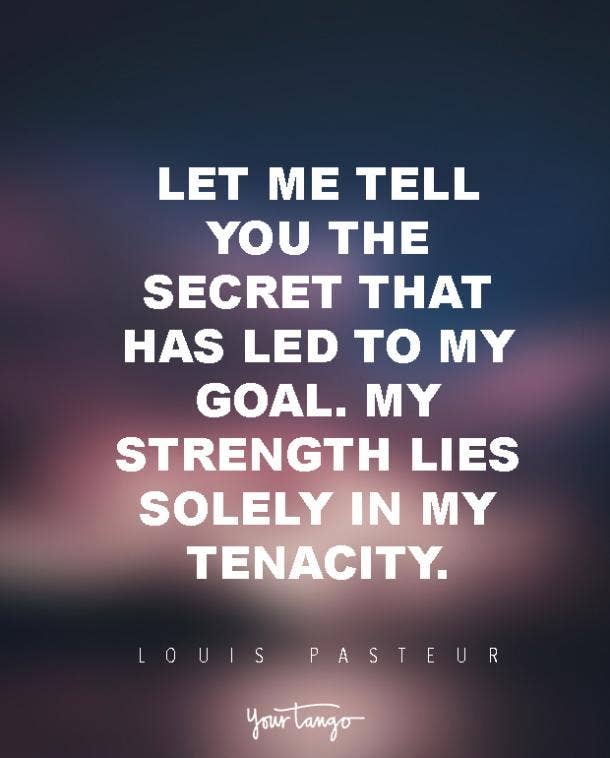 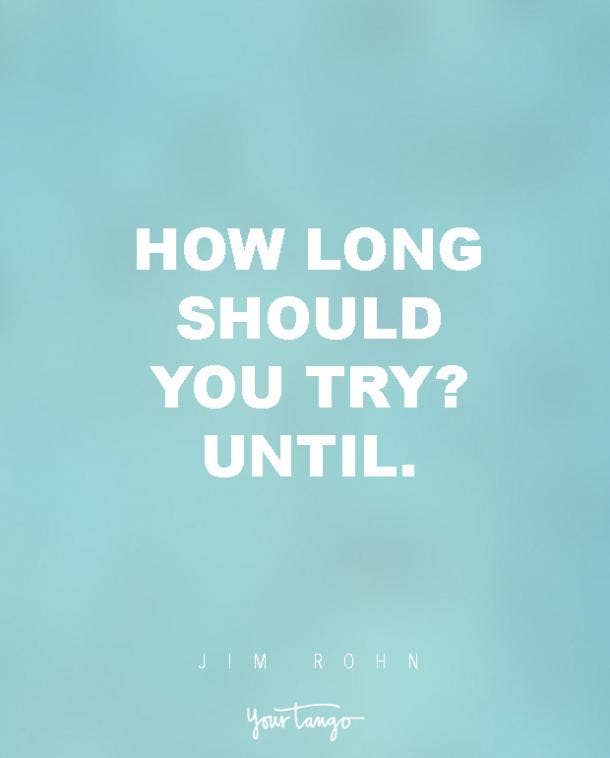 9. “Don’t be discouraged. It’s often the last key in the bunch that opens the lock.” — Anonymous 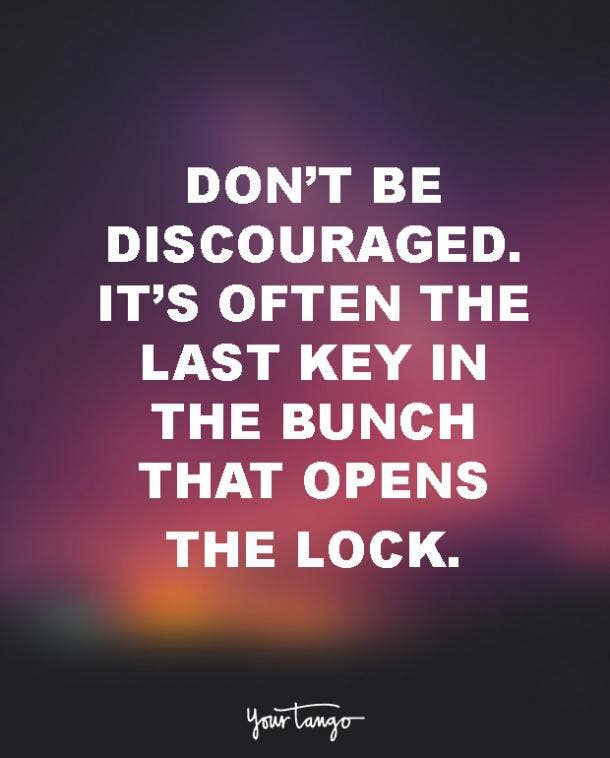 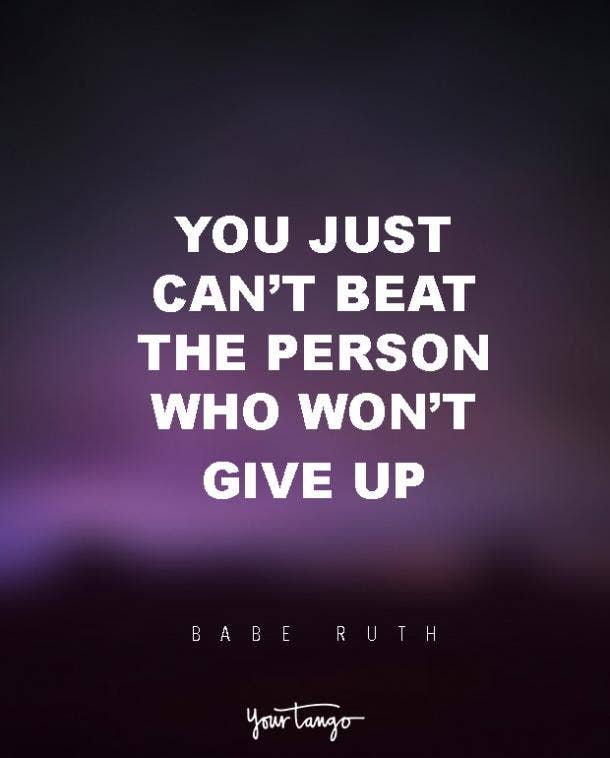 11. “Success is what happens after you have survived all your mistakes.” — Anora Lee

14. “The fight is won or lost far away from witnesses — behind the lines, in the gym, and out there on the road, long before I dance under those lights.” —Muhammad Ali

15. “The supreme art of war is to subdue the enemy without fighting.” —Sun Tzu

16. “To be nobody but yourself in a world which is doing its best, night and day, to make you everybody but yourself means to fight the hardest battle which any human being can fight, and never stop fighting.” —E.E. Cummings

17. “If you are going through hell, keep going.” ― Winston S. Churchill

18. “Sometimes even to live is an act of courage.” ― Lucius Annaeus Seneca

19. “Many of life’s failures are people who did not realize how close they were to success when they gave up.” ― Thomas A. Edison

22. “Real courage is when you know you’re licked before you begin, but you begin anyway and see it through no matter what.” ― Harper Lee, To Kill a Mockingbird

24. “Just because you fail once doesn’t mean you’re gonna fail at everything.” ― Marilyn Monroe

25. “Let me not beg for the stilling of my pain, but for the heart to conquer it.” ― Rabindranath Tagore

26. “You keep putting one foot in front of the other, and then one day you look back and you’ve climbed a mountain.” ― Tom Hiddleston

27. “Continuous effort — not strength or intelligence — is the key to unlocking our potential.” ― Winston S. Churchill

29. “Dripping water hollows out stone, not through force but through persistence.” ― Ovid

30. “The difference between a successful person and others is not a lack of strength, not a lack of knowledge, but rather a lack in will.” ― Vince Lombardi

31. “Every strike brings me closer to the next home run.” ― Babe Ruth

34. “Courage is not having the strength to go on; it is going on when you don’t have the strength.” ― Teddy Roosevelt

35. “Failure is a bend in the road, not the end of the road. Learn from failure and keep moving forward.” ― Roy T. Bennett

36. “You may have to fight a battle more than once to win it.” ― Margaret Thatcher

39. “Remember the two benefits of failure. First, if you do fail, you learn what doesn’t work; and second, the failure gives you the opportunity to try a new approach.” ― Roger Von Oech

41. “Nothing great is ever achieved without much enduring.” ― St. Catherine of Siena

44. “A dream you don’t have to fight for isn’t a dream—it’s a nap. One changes your afternoon. The other changes your world. Keep fighting.” ― Jon Acuff

45. “No matter how much falls on us, we keep plowing ahead. That’s the only way to keep the roads clear.” ― Greg Kincaid

46. “If the fire in your heart is strong enough, it will burn away any obstacles that come your way.” ― Suzy Kassem

48. “You go on. You set one foot in front of the other, and if a thin voice cries out, somewhere behind you, you pretend not to hear, and keep going.” ― Geraldine Brooks

50. “There always comes a time in life where you can either give up or step up.” ― Graeme Rodaughan

51. “Champions keep playing until they get it right.” ― Billie Jean King

52. “The only guarantee for failure is to stop trying” ― John C. Maxwell

53. “In the confrontation between the stream and the rock, the stream always wins, not through strength but by perseverance.” ― H. Jackson Brown

54. “There are always periodic opportunities to give up, while every single moment is an opportunity to persevere.” ― Dean F. Wilson

56. “We all fall sometime but it’s those that get back up and try again that make the difference.” ― Gary Revel

57. “Be strong, be fearless, be beautiful. And believe that anything is possible when you have the right people there to support you.” — Misty Copeland

58. “Failure will never overtake me if my determination to succeed is strong enough.” — Og Mandino

59. “Sometimes you don’t realize your own strength until you come face to face with your greatest weakness.” — Susan Gale

60. “Promise me you’ll always remember: You’re braver than you believe and stronger than you seem, and smarter than you think.” — A. A. Milne

61. “Hard times don’t create heroes. It is during the hard times when the ‘hero’ within us is revealed.” — Bob Riley

62. “Build up your weaknesses until they become your strong points.” — Knute Rockne

63. “The bird rises against a strong headwind, not only in spite of the wind but because of it. The opposing force becomes a lifting force if faced at the right angle.” — L.B. Cowman

64. “Strength does not come from winning. Your struggles develop your strengths. When you go through hardships and decide not to surrender, that is strength.”— Arnold Schwarzenegger

65. “Most of the important things in the world have been accomplished by people who have kept on trying when there seemed to be no hope at all.” — Dale Carnegie

67. “Each of us is stronger than we realize. Strength is something we often find in desperate moments.” — Jennifer Arnold

68. “Nothing is impossible, the word itself says ‘I’m possible’!” — Audrey Hepburn

69. “Difficulties are meant to rouse, not discourage. The human spirit is to grow strong by conflict.” — William Ellery Channing

70. “Let me tell you the secret that has led me to my goal. My strength lies solely in my tenacity.” — Louis Pasteur

71. “The greatest test of courage on the earth is to bear defeat without losing heart.” — Arvind Jain

72. “Problems are not stop signs; they are guidelines.” — Robert Schuller

73. “When everything seems to be going against you, remember that the airplane takes off against the wind, not with it.” — Henry Ford

74. “Stay strong, be brave, love hard and true, and you will have nothing to lose.” — Demi Lovato

76. “There is no substitute for hard work. Never give up. Never stop believing. Never stop fighting.” — Hope Hicks

78. “Either you give in, or you fight. That’s all I know, being where I’m from. You fight for what you want. You go after what you want.” — Allen Iverson

79. “Either you give in, or you fight. That’s all I know, being where I’m from. You fight for what you want. You go after what you want.” — Napoleon Hill

80. “Just dream big. Go for it. There’s nothing holding you back. You can have ups and downs, but if you believe in something, keep the faith; keep fighting. And don’t let people put you down.” — Geraint Thomas