Dorothy Vaughan is an American mathematician and a human-computer.

One of her prominent discoveries was the work she did for the SCOUT Launch Vehicle Program that shot the first satellites into space. Dorothy Vaughan was born in 1910 in Missouri and died in 2008. She wasn’t properly recognized until Margot Lee Shetterly released a book called ‘Hidden Figures: The American Dream And The Untold Story Of The Black Women Mathematicians Who Helped Win the Space Race’ where she talked about the huge contributions and discoveries made by Dorothy and the other mathematicians, Katherine Johnson and Mary Jackson.

Later, a movie, ‘Hidden Figures’, written by Allison Schroeder, was released in 2016 and was based on the book which illustrated the huge contributions by these women. Here are some quotes about Dorothy Vaughan that you would definitely enjoy.

‘Hidden Figures’ was directed by Theodore Melfi with Octavia Spencer starring as Dorothy Vaughan, Taraji P. Henson as Katherine Johnson, and Janelle Monáe as Mary Jackson. ‘Hidden Figures’ movie quotes talk about how these three prominent women outshone and went beyond race line and gender discriminations with their unity and hope.

1. “Mary Jackson: She’s not married. She’s a widow with three beautiful little girls. So well behaved. Angels on earth is what we like to call them. Dorothy, slice of pie?

Katherine Johnson: You already have a slice of pie, Dorothy.”

3. “Vivian Mitchell: Despite what you may think, I have nothing against y’all.

Dorothy Vaughan: I know, I know you probably believe that.”

Mary Jackson: Hard being of service broken down on the side of the road, though.”

5. “Mary Jackson: This starter is starting to make us late. We are all going to end up unemployed riding around in this pile of junk to work every day.

Dorothy Vaughan: No, thank you, Officer. I think I got it.”

7. “I haven’t been late one day in ten years. Haven’t been out sick. Haven’t complained. My work’s on time. It’s done right, it’s done well.”

8. “What’s not fair is having the responsibility of a supervisor, but not the title or the pay. And watching you two move on. Now, don’t get me wrong. Any upward movement is movement for us all, just isn’t movement for me.”

9. “Vivian Mitchell: Space Task Group needs a computer, ASAP. Someone with a handle on analytic geometry. We can’t fill that position out of the east group.

Vivian Mitchell: Everything’s temporary, Dorothy. You have someone?

Dorothy Vaughan: Yes, ma’am. Katherine’s the gal for that. She can handle any numbers you put in front of her.”

10. “Dorothy Vaughan: The IBM 7090 data processing system. It has the capability of solving over twenty-four thousand multiplications per second.

West Area Computer Woman #2: They’ll never get that to work.

Dorothy Vaughan: Oh, it’ll run eventually, and when it does, we have to know how to program it. Unless you’d rather be out of a job.”

Here are yet another set of famous Dorothy Vaughan quotes to help you see and think; these inspirational quotes have deep life teachings hidden behind, that you might like to reflect on:

13. “Now don’t get me wrong, any upward movement is movement for us all.”

14. “At a church picnic, speaking about Colonel Jim Johnson while fixing plates at the food table] I hear he’s planning on staying in the area.”

15. “We’re going to need a lot of manpower to program that beast. I can’t do it alone. My gals are ready, they can do the work.” I’m not the fastest reader or writer but occasionally I’ll write things down just so I don’t forget them. — Thighpaulsandra Life is Happiness. Happiness is the fact that I can do something right now. — Lee Donghae I don’t get ideas, I have them. The trick is to remember where I’ve put them. — Brad Holland I’m addicted to women. Believe me, as Shaggy, after every concert, there’s drawers that are dropping. — Shaggy In prosperity you may count on many friends; if the sky becomes overcast you will be alone. — Ovid Self-esteem is a powerful force within each of us … Self-esteem is the experience that we are appropriate to life and to the requirements of life. — Nathaniel Branden Get warm any way you can, and love God and pray. — Thomas Merton Philosophy of science is about as useful to scientists as ornithology is to birds. — Richard Feynman I am like a winged creature who is too rarely allowed to use its wings. Ecstasies do not occur often enough. — Anais Nin Think what devils chase a man who cannot sleep in his own house. — Warren Eyster Everyone hits bottom their own way. — Eileen Brennan 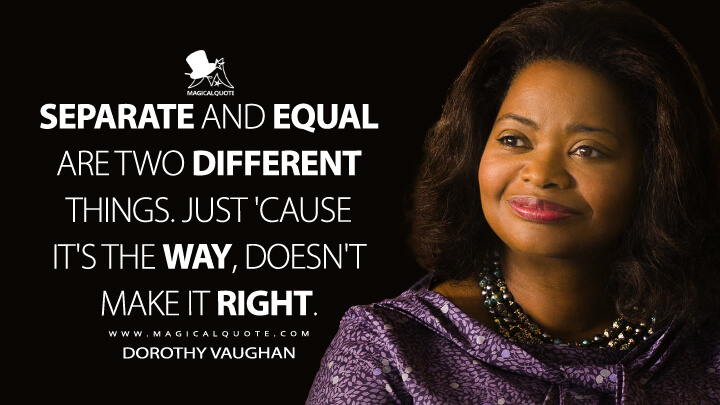 Separate and equal are two different things. Just ’cause it’s the way, doesn’t make it right.

You act right, you are right. That’s for certain.